Join The Fan Lab, a private Fandom research community for users in the US and UK where you will be asked to share your opinions on all things gaming and entertainment! Click here to see if you qualify

Talk:Cameos in The Legend of Zelda

=== Malon's Necklace ===
The necklace Malon wears resembles the face of Bowser from the Mario series.

Oh! I thought you ment Bowser :P I'll check the necklace. Something tells me that uploading that image wasn't a good idea.--User:Mandi/sig 02:46, 4 January 2009 (UTC)

It's easy to get rid of images. Just whack {{Delete}} on the page, and an admin will delete it pretty quickly at the uploaders request. That would be great if you can find/ get a necklace picture. If not I'll try and get one. {{:User:Melchizedek1866/sig 02:48, 4 January 2009 (UTC)

I'm not sure which of these images I prefer. On one hand, the image above shows all the detail clearly and in one shot. But on the other hand, the one below also has Malon's face, and doesn't have the game's GUI icons cluttering it up. Thoughts please? —Adam [ talk ] 07:47, 4 January 2009 (UTC) 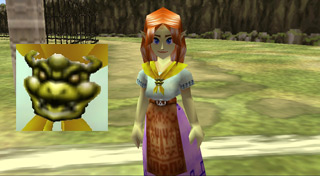 ==''A Link to the Past''==
Pictures of Mario hang in most of the village houses.

As you said Axiomist this has a lot to be added, and it will grow over time. We want to keep it neat and aim for Featured article quality... so the above simple sentence needs to be elaborated upon and have picture support before it goes back on the page.{{:User:Melchizedek1866/sig 05:00, 4 January 2009 (UTC)

Almost all of this information and much more is already on the Cameos in The Legend of Zelda page. It might be easier to just merge this one to that one since it has more info.Axiomist 05:04, 4 January 2009 (UTC)

The merge is complete. This is what we need to work on with this page now:

Why is the page showing up in the people category, I can't find anything on the page to put it there... and also are there any categories that easter eggs fit into? {{:User:Melchizedek1866/sig 12:35, 15 December 2008 (UTC)

Okay, I've added the merge template. Indeed these two pages should be combined, just under which of the headings...and also, this merge should be done slowly...making sure we add pictures, write it up better and have references. As far as quality goes, this Easter Eggs page owns the other one. Discuss... {{:User:Melchizedek1866/sig 05:10, 4 January 2009 (UTC)

My suggestion is to just add this to the cameos page and elaborate on whichever entries seem substandard. That page has more information and is older. But if it were to come to here, then it's content would die until someone worked on it to meet your expectations.Axiomist 05:18, 4 January 2009 (UTC)

Yeah, that sounds like a good idea. We could merge now, add more content to the lacking entries. That would work.--User:Mandi/sig 05:23, 4 January 2009 (UTC)

I will merge this onto the cameos page now, and make Easter Eggs a redirect. We'll all have to work thoroughly on the cameos page to meet the wiki standards, not simply my standards. {{:User:Melchizedek1866/sig 05:25, 4 January 2009 (UTC)

The carving lacks Bowser's characteristic hair, horns, and shell. If anything, it looks more like Yoshi than Bowser.... Jimbo Jambo 02:03, 13 February 2009 (UTC)

Personally I believe it's just a fun little Easter egg and doesn't necessarily represent anything, but it still does look a lot more like King Dodongo than Bowser.... More opinions would be appreciated though. Jimbo Jambo 22:04, 15 February 2009 (UTC)

The reason the multiple possibilities are stated, even if they lack evidence is because some people believe them, and it is unsure. I believe Ganon. {{:User:Melchizedek1866/sig 10:26, 16 February 2009 (UTC)

man I cant believe I barely remembered this: http://www.youtube.com/watch?v=HpZPi0VN1Nw watch this and see that godzilla is shown as bowser.

Under the TRR sections, it states: "The Tingle Tuner, which highly resembles a Game Boy Advance, makes a reappearance." Anyone have a source? I've played through the game several times, and have yet to see this. I highly doubt its authenticity. —Alter  {T C B H } 04:06, 13 February 2009 (UTC)

This is the Cameos in The Legend of Zelda page and based on that, technically TRR shouldn't be on the page because it isn't a Zelda game. What to do? Thoughts. {{:User:Melchizedek1866/sig 21:58, 14 February 2009 (UTC)

I agree that the game has to stay on this page, but the cameos listed don't feel correct to me. This page is about cameos in the TLOZ games, not between the TLOZ games. Also, how is that supposed to be Zelda? That lady doesn't look a thing like her. IfIHaveTo 11:44, 13 August 2009 (UTC)

Did Zelda ever had purple hair? Or a headband-helmet? A brown/red skirt? Also, yes, this game is full of wonderfull little cameos, and all of those are clear as daylight. Ingo's appearance, Mount Desma, Fish/Sea Zora Head, Lon Lon Meadow, Stalfos, Oinkers (that, if I'm not mistaken, are called -blin in Japanese), Deku Tree, Fairies and what I didn't notice until reading it here, a River Zora based fountain. If anything, I'd say Zelda makes a cameo on the scratchcards as the blond girl in blue outfit. This girl however, only has pointy ears and her gender to match her to Zelda, which is nothing.

P.S., would you agree to move all in-TLOZ cameos listed to FPTRR's page? Since FPTRR is a Zelda game, Zelda references don't count as cameos. It is interesting information though for people who want to know more about the canonicity of the game and therefor is most useful on FPTRR's page. Ingo's info can sorta stay because of his origin as a Luigi-inspired character. IfIHaveTo 07:56, 16 August 2009 (UTC)

If FPTRR is not a Zelda game, it has no business on this page. If it is a Zelda game, its Zelda cameos should not be listed here. If it is not a Zelda game, the information could be moved to "Cameos of TLOZ", but because of FPTRR's nature as a spin-off, I don't think it fits in with that page's intent. This wiki treats FPTRR as canon in every other instance, so I think that its the most logical to keep that line of thought up (although I do think this wiki would do well to create a page on defining Zelda canon). As such, I prefer to see most of the info moved to FPTRR's page, possibly under the header "Connection to The Legend of Zelda", which could go in detail on the game's spin-offness (gameplay comparision, future of the series, etc) in addition to the 'cameos' list. I know that if I would want to know more about the way FPTRR ties in to the TLOZ games, I'd first look at the game's page, then search through the links the page holds. I don't think it would occur to me to look for and at a page like this one. IfIHaveTo 20:44, 16 August 2009 (UTC)

Well, there is, but it's kinda hidden within a related article: Timeline_Principles#Canon. According to that, TRR is "arguably canon". If you're going to make a new article regarding canon, that article might be a good place to start. --Ionizer (t c) 09:09, 17 August 2009 (UTC)

In the 3D version of Ocarina, instead of seeing the Mario portraits, in the right window you see a scene from the game New Super Mario Brothers. Shall this be added? MadMags 14:40, 3 June 2011 (EDT)