OK, so I thought this seemed a bit too good to be true when it was created, and then the inconsistencies in this image prompted me to go and do some research. That picture not only disproves the statement in the Trivia section about her changing her clothes to match Link (since he's fighting her dressed in blue, and she's in red), but at the same time Navi is referring to her as just "Gerudo Thief". My thoughts now are that the actual second-in-command (the one shown speaking here, in reference #4) only appears once, and is not the same individual as the sword wielding Thief/Thieves which Link fight to free each of the carpenters (which may, themselves, be intended to represent four different individuals...). 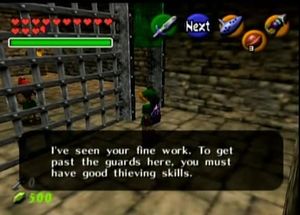 Looking at this YouTube video of the conversation with the second-in-command, her comment seems to suggest that this is their first meeting. Also, although it's not especially clear, it look like she's dressed in blue. So, any objections if I edit the page accordingly and remove the current images? —Adam [ talk ] 09:19, 18 January 2009 (UTC)

I wrote the part about her clothing changing during the battle. That was my fault, false recollection. However, I know for a fact that her clothes do change when she gives you the membership card, and I think she was wearing green in that video. I don't think Navi's quote proves much, but upon reading the conversation between the second-in-command and Link, yeah, it doesn't really seem like she was the one he had been engaged in combat with. Jimbo Jambo 17:57, 21 January 2009 (UTC)

OK, well I added some better images than the one above. It would be nice to get confirmation on the colour change thing, but other than that I'd say the article is about as accurate as we can realistically be. —Adam [ talk ] 20:03, 21 January 2009 (UTC)

I'm not really sure how you can cite that, unless you could find a video, but I'm pretty sure it's a fairly well-known fact. I don't know why I keep putting off downloading that ROM though.... Also, since it seems like we all agree that the second-in-command is not the thief/any of the thieves that Link fights, should we reword that part of the trivia, or even bump it up into the main body of the article? Jimbo Jambo 20:22, 21 January 2009 (UTC)

Ah, nice pictures of the differently colored outfits. Could someone with the GC version confirm whether or not the color change happens there too?
Also, unrelated, should the {{clear}} template really be used here? I can see what Goron Moron is saying about the image bumping around header text, but...that is one big gap in the middle of the page. Jimbo Jambo 06:32, 22 January 2009 (UTC)

We don't need images, we just need someone who has the GC version to tell us whether or not her clothes change color. Jimbo Jambo 08:44, 22 January 2009 (UTC)

Not sure if you still need this information, but her clothes change color on the Virtual Console version- they probably do on the GC version, too. —Darkness(Talk) 18:22, 10 March 2013 (UTC)

Just a thought, I think this page needs to be moved for capitalization, but I'm not sure to WHERE exactly -- "Nabooru's Second-in-Command" or "Nabooru's Second-In-Command"? Not sure which is more correct. —Ando (talk) 20:06, 21 January 2009 (UTC)

I think the lowercase is appropriate, like I think it would also be on the Running Man article, but this wiki might have a different standard. If we do go with caps, I would go with the first title you suggested. Jimbo Jambo 20:22, 21 January 2009 (UTC)