The stylus is a pen-like object used to operate the touch screen on the Nintendo DS, Nintendo 3DS and the Wii U.

The Legend of Zelda games

To date, The Legend of Zelda games that use the stylus are: 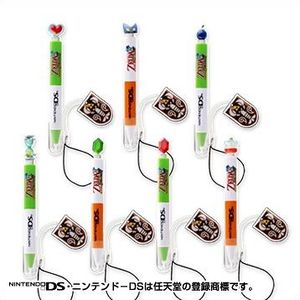 A Phantom Hourglass stylus set was released by Yujin in 2007. There are a total of seven different styli in the set, each with a different item top. Each stylus has a body that is either green or orange.

At E3 2009, the stylus was given to players who tried the demo for Spirit Tracks.

In Japan, the same stylus was released as an early buyer bonus for Spirit Tracks. It came inside a green Rupee case.