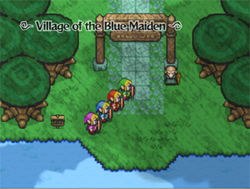 Village of the Blue Maiden, an example of a Stage from Four Swords Adventures

Stages,[name reference needed] also sometimes known as Levels, are a type of location that appear in a few The Legend of Zelda games. Unlike most games in the series, where Link freely travels through an open world to many different locations and dungeons, Stages differ in that they are self-contained worlds or locations that constitute a disconnected overworld. Stages are selected from a menu rather than traveled to and explored continuously like locations in other Zelda titles. Stages have been used most extensively in games that utilize multiplayer, such as Tri Force Heroes. Upon completion of a Stage, a new Stage is unlocked, thus forwarding the game's story and progression.

Different terminology has been used to refer to Stages and Levels. in Four Swords Adventures, "Levels" refers to chapters that contain three Stages each. In Tri Force Heroes, Levels are instead used to refer to the self-contained worlds, whereas "Stages" refers to each segment or area within a Level. In Hyrule Warriors, the game's Stages are split into chapters called Scenarios in Legend Mode. Some Stages are revisited, and thus have more than one Scenario.

Stages are also featured in combative modes as well, such as the Shadow Battle mode in Four Swords Adventures, the Battle Mode in Phantom Hourglass and Spirit Tracks, Shadow Link Battles in A Link Between Worlds, and the Coliseum in Tri Force Heroes. In these modes, players battle against each other or a Shadow of another player instead in enclosed Stage arenas.