From Zelda Wiki, the Zelda encyclopedia
(Redirected from Spirits of Good)
Jump to: navigation, search

The Spirits of Good are deities in Spirit Tracks.[1] They are never seen but often mentioned. They live in the heavens watching over the people of Hyrule, and they played a major role in the war that ensued between the Demon King and the Spirits of Good.

In the beginning, the people of the land followed and worshiped the Spirits of Good, living a life of prosperity and peace; however, the evil Demon King suddenly rose to power and attacked the land, ending the era of peace and destroying everything in his path.[2] The Spirits of Good had no choice but to come down from the heavens and ensue in a long and bloody battle with him. Although the spirits were powerful, they could not destroy the Demon King: they were only able to subdue him, and by that time, the power of the Spirits of Good had been depleted greatly.[3] They used their remaining power to bury the spirit of the Demon King in the ground, building shackles known as the Spirit Tracks and a tower that acted as a lock.[4] With their powers almost completely gone, the Spirits of Good returned to their home in the heavens, leaving the land deprived of both demons and spirits.[5]

The Lokomo are servants of these spirits.[6] The Spirits sent the Lokomo to Hyrule and entrusted them to take care of the land due to their absence, leaving the Lokomo with a number of tools to help with this burden, specifically the Spirit Train, the Bow of Light, and the Compass of Light.[7][8] Moreover, the Lokomo Sword was handed over to them as well, which is a sword that is infused with sacred energy that had only been used by the spirits to battle evil.[9]

Symbol of the Spirits 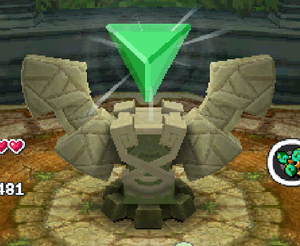 The symbol of the spirits: a Force Gem resting on top of a pedestal

The emblem of the Spirits of Good is depicted to be a Force Gem on top of a pedestal and appears on various items and places that have some connection to the Spirits. It should be noted that while the Triforce, which is considered to be the famous emblem of Hyrule and its Royal Family, is nowhere to be seen, the symbol of the Spirits appears throughout many places of the kingdom, most notably, in front of the Spirit Train, atop the Tower of Spirits, and in the middle of the Rail Map. As such, it is also sometimes referred to as the crest of the "new Hyrule." Since the Lokomo are servants of the Spirits, the small vehicles they ride on depict the Spirits' symbol in the front as well.

Whenever Link clears a temple, a Force Gem is unlocked, and a pedestal in which it rests emerges from the ground. This is the same symbol as the Spirits', which further illustrates their influence around the kingdom. It is interesting to note that the Lokomo Sword's hilt is specifically shaped like the symbol of the spirits, as well as Bow of Light and the shield used by Link, which has a more intricate and elaborated pedestal along with the Force Gem. Moreover, the Warp Gates that appear throughout the overworld also bear the emblem all along the arc that supports the gem at the top.