This article refers to the train tracks that serve as the shackles of the Demon King Malladus. You may be looking for the game of the same name, The Legend of Zelda: Spirit Tracks.

The Spirit Tracks are objects in Spirit Tracks.[1] They are a series of special train tracks that span in four directions across the land of Hyrule that also serve as the titular object featured in the game of the same name, Spirit Tracks.[2] Not only do the rails of the Spirit Tracks provide a means of transportation for Hyrule's people,[3] they also serve an even larger purpose as the chains that bind the evil Demon King, Malladus, in his prison, as the Spirits of Good were not able to destroy him.[4] They carry through their rails the energy that sustains their existence and powers the Tower of Spirits at the center of Hyrule that is generated from four special temples located all across the land.[5] The Spirit Tracks go all over the land, across fields, through snow, under the ocean waves, over mountains, and even into the Dark Realm.

There are several ways to restore the Spirit Tracks throughout the kingdom: either by retrieving a Rail Map atop the Tower of Spirits,[6] playing a Lokomo Duet,[7] restoring a Force Gem inside each realm’s temple, receiving a Force Gem from a grateful citizen,[8] or by obtaining the Compass of Light.[9] Link must do each of the mentioned methods to fully recuperate the lost tracks and thus completely energize both the Rail Map and the Tower of Spirits. 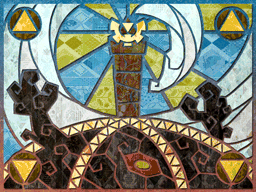 The Spirit Tracks are created as Malladus's shackles by the Spirits of Good.

The Spirit Tracks have a long history behind them dating back even before the reinstatement of the kingdom of Hyrule in the land of the legendary Spirits of Good. The first settlers of the land lived in harmony under the protection of the Spirits of Good for some time, until an evil entity known as the Demon King, Malladus, rose to power and threatened the land with destruction and ruin.[10] The spirits engaged him in a long and bloody conflict for the fate of the land and its inhabitants.[11] After realizing they did not possess the strength to truly kill him, the spirits devised a way to halt his reign of terror, by locking him away in an underground prison. This prison would have a unique system of shackles and a central lock. Those shackles, a large set of train tracks that would come to be known in time as the Spirit Tracks, would span all across the land in four directions, so as to chain Malladus in his prison, with the Tower of Spirits acting as the lock. So to this end, the Spirits of Good used their last remaining power to drive Malladus deep underground and crafted the tracks and the tower to seal it, bringing the war to a successful end.[4] The spirits, their powers greatly depleted, departed for the heavens, giving the land over to the Hyrulean settlers led by the Hero of Winds and Tetra (who rechristened the land as the reborn kingdom of Hyrule) and leaving their servants, the Lokomo, to guard the land and mankind against the return of the Demon King.[12][13]

Thus far, the Spirit Tracks have only made one appearance in the series, in the game of the same name, Spirit Tracks. Here they appear to cover all the realms of Hyrule with their central hub at the Tower of Spirits near the center of the kingdom, making constant appearances as Link uses them to travel on his adventure to save Hyrule.[14] 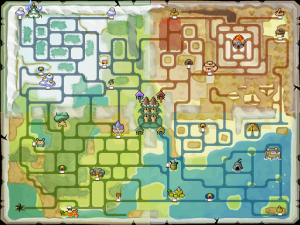 A full map of the Spirit Tracks that cover Hyrule.

In Spirit Tracks, the titular Spirit Tracks are revealed in the introduction to have been a creation of the Spirits of Good to bind the Demon King Malladus in his prison deep beneath Hyrule.[4] By the time of the main events of the game a century later, the tracks have taken on another purpose as the primary source of transportation for Hyrule's people, who have developed transportation by trains in the interim period.[3][15] A century after the land the Demon King once terrorized was re-branded as the re-established kingdom of Hyrule, the Spirit Tracks begin to mysteriously vanish, causing Hyrule's Princess Zelda to suspect one of her officials, Chancellor Cole, of a plot to destroy the rail system to set Malladus free upon the land once again.[2] These suspicions are confirmed when the Chancellor shatters the Tower of Spirits that serves as the central hub of the rail system.[16]

Link and Princess Zelda eventually meet Anjean, who reveals what is really happening: the Spirit Tracks are disappearing because something has happened to the four temples that sustain them and send their energy through the tracks into the Tower of Spirits, thereby providing it with the energy that powers it. Without this energy flowing into the tower from the temples, the Spirit Tracks have gradually begun to vanish and the Tower of Spirits has been weakened to the point that Cole was able to shatter it.[5] The wise old Lokomo tasks the pair with retrieving the sacred Rail Maps found throughout the tower to reach each of the temples and reactivate their energy beacons in order to fully restore the Spirit Tracks and the Tower of Spirits to their original states.[17]

Though the tracks are restored and the tower rebuilt, Malladus escapes and once more is a large threat to the land. Link and Zelda eventually defeat the Demon King and, with this, the Lokomo depart for the heavens as they are no longer needed to guard the land, leaving Link and Zelda to protect it along with the tracks in their stead along with their descendants.[19] It is presumed that the Spirit Tracks remained as a very important part of Hyrule thereafter, though now solely functioning in their role for transportation, as evidenced in one ending of the game showing Princess Zelda running to her window in Hyrule Castle at the sound of a train whistle, presumably to greet Link, who chooses to remain a Royal Engineer in this ending.