Hyrule Field is a recurring large, grassy area that composes most of Hyrule in The Legend of Zelda series.[1][2][3][4][name reference missing] It is the central region of Hyrule that leads to all of the prominent locations of the kingdom, and as such, Link must travel through Hyrule Field to reach villages, markets, and lakes, among other places. In Majora's Mask, there is a parallel version of Hyrule Field called Termina Field. Though the many game-specific regions of Hyrule often have a large field common to and one that connects all areas of the map, only those specifically labeled as Hyrule Field are of any significance.

Hyrule Field is a large round area that acts as the hub or crossroads of Hyrule in Ocarina of Time. All other areas of the game branch out from this region. However, there is little activity, and besides a few side-quests, it serves little purpose other than maintaining the illusion of a vast land.

Located in the center of Hyrule Field is Lon-Lon Ranch, and all other areas dwell on its outskirts. At the northmost section of the field rests Hyrule Castle Town, the main center of activity of Hyrule which also serves as the location of Hyrule Castle. To the northeast is Kakariko Village, the primary settlement for Hyruleans, and just north of the village is Death Mountain. Zora's River and ultimately Zora's Domain reside in the east, while the Kokiri Forest is situated in the southeast. Directly to the west of Kokiri Forest is Lake Hylia, a deep, pure lake that is home to the Water Temple.[5] Lastly, Gerudo Valley is located to the west, where one the other side of the valley the gang of female thieves have established their hideout, the Gerudo's Fortress.[6]

All of the waterflow in Hyrule is a direct source from the waters in Zora's Fountain, located in the northeast. This water flows through Zora's River and makes its way past Castle Town, continuing its path through the bottom of Gerudo Valley and eventually reaching its final destination: Lake Hylia.[7]

As young Link, Stalchildren burrow out of the ground during the nighttime and attack the young hero. They can be avoided by sticking to the dirt road or by wearing the Bunny Hood. Peahats can also be found in the southern and northern corners of the field, and will attack anyone who gets too close to their territory during the day; however, if Link attacks the Peahats during the night, they will send out Peahat Larva to chase after him. Once Link turns into an adult by retrieving the Master Sword from its Pedestal, the Stalchildren and the Peahats will disappear; instead, Big Poes as well as ordinary Poes will roam the field, although they will only appear at certain spots. 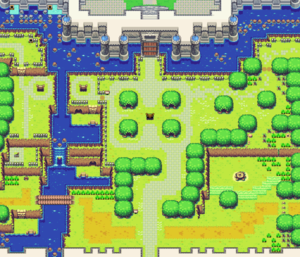 South Hyrule Field is the home of Link and his grandfather Smith, and houses very few enemies, most of them being Red Octoroks. Tingle also appears in South Hyrule Field, standing upon a small tree stump just east of Link's House.

North Hyrule Field is the main path to Hyrule Castle and has more enemies than its southern counterpart, including Red Octoroks and Crows. It is also home to Greatblade's dojo.

In the center of the field where four trees make a square, Link must fuse Kinstone Pieces with each of the four Tingle Siblings?. Doing so will open each tree, where Link will find Treasure Chests and Switches. When Link steps on each Switch, a final opening will be revealed in the center of the trees, containing a Treasure Chest with the Magical Boomerang inside. There is also a Minish Portal in the form of a tree stump. 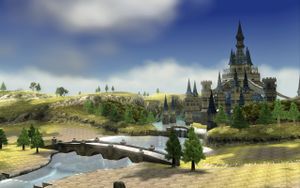 In Twilight Princess, Hyrule Field is almost five times larger than in Ocarina of Time and spans three Provinces: Lanayru, Eldin, and Faron. It sports more landscape variety than its previous incarnation, including bridges, rocky cliffs, woods, and ancient ruins, and unlike Ocarina of Time, Twilight Princess Hyrule Field is not one huge area, but several areas connected by pathways. Due to its immense size, it is easier to traverse the field with either the help of Epona or by warping through a Portal.

Hyrule Field surrounds Hyrule Castle and is full of shortcuts and entrances to many other areas, including:

Several important game events occur in the field. After Colin gets kidnapped by King Bulblin, Link follows him to the east portion of Hyrule Field, where the young hero defeats King Bulblin at the Bridge of Eldin. Link must once again journey through Hyrule Field as Telma, Ilia and Ralis are riding in a caravan on their way to Kakariko Village from the Hyrule Castle Town while the young hero defends Telma's caravan from enemy attacks during the ride. The last event is the final two fights against Ganondorf which take place on East Hyrule Field.

When riding Epona through Hyrule Field, a remixed version of the theme music is played, which adds brass instruments to the melody.

Unlike in previous Zelda games, Hyrule Field in Breath of the Wild is completely open; all parts of the overworld will be accessible with no interruptions, whereas in previous games, different parts of the overworld were separated by loading screens. There are also enemies roaming the field such as the one shown in the game's reveal trailer.[8] Central Hyrule houses Hyrule Field's location in the game.

Hyrule Field appears in two stages of Link's Crossbow Training. The first appearance in Level 2 is a skeet shoot scenario involving skulls. The camera angle is fixed in place, but the skulls fly in different directions. The stage also features a Scarecrow and three wooden barrels.

The second appearance of the field is in Level 8, where Link rides on Epona. The camera angles are fixed for each 20 second sections of the stage. The first segment shows a section of Hyrule Field in daylight. Targets appear in the distance of the background as well as close enough to obstruct view of other objects. The second segment shows the field at dusk, while the final segment at night. This last segment changes the camera angle from a side-scroll scene to a forward-scrolling one.

Hyrule Field appears as a Stage in Hyrule Warriors. It contains the Scenarios "The Armies of Ruin" and "Battle of the Triforce"