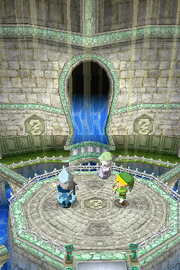 Carben and Link playing the Song of Restoration

The "Songs of Restoration",[1] also known as Lokomo Songs,[2] are songs in Spirit Tracks. They are duets that Link plays with another member of the Lokomo tribe.

The Lokomo plays his or her part first using their own sacred instrument, while Link then follows by playing the Spirit Flute. At the end of the duet, both Link and the Lokomo play at the same time, thus generating energy that powers the Spirit Tracks.[3] Throughout his journey, Link must visit the five Lokomos who live in their respective sanctuaries scattered across the five realms in order to play the duets with them and restore the Spirit Tracks that lead to each realm's temple.[4]

Link is first given a chance to practice the melody with said Lokomo before doing their performance. Once the young hero is done practicing, he must put the Spirit Flute down to then try the real performance. As the two are playing, Link must play his notes with the tempo given by the metronome in order to play the song correctly; thus, having a sense of rhythm is essential when playing Lokomo Songs.

Unlike the other songs learned on the Spirit Flute, the Lokomo Songs do not stay in Link's inventory and can only be played once with its respective Lokomo throughout the whole game.

The first Lokomo Duet that Link learns is in the Forest Sanctuary. Link, along with Gage and his cello, play the duet to restore the tracks leading to the Forest Temple.

Steem, using his pipa, plays the second duet with Link in the Snow Sanctuary, revealing the Spirit Tracks to the Snow Temple.

In the Ocean Sanctuary, Link must play a duet with Carben and his flute to open the path to the Ocean Temple.

The fourth Lokomo Duet is learned with Embrose, who plays the timpani in the Fire Sanctuary located behind the Goron Village. After Link plays the duet with him, the Fire Rail Map is energized and reveals new tracks on the map that lead to the Fire Temple.

The last Lokomo Duet is with Rael of the Sand Sanctuary. He plays the oboe along with Link's Spirit Flute to reveal the tracks to the Sand Temple.

In the final battle against Malladus, after Princess Zelda sings a duet with Link, all five Lokomos join in with their respective instruments to form a full orchestrated version of the piece. This melody reveals a weak spot in Malladus's back.