The Snowhead Region is the northern area of Termina in Majora's Mask,[1] where a strange change in the weather has turned the area from a calm spring to a raging winter.

Mountain Village is home to Zubora and Gabora, who are able to upgrade Link's Sword. There is also a Goron stranded on a cliff face in this area, and Link is able to rescue him by revitalizing the Goron's strength with a Rock Sirloin from Goron Shrine, receiving Don Gero's Mask in return. The Goron Graveyard, the resting place of Darmani III, can also be found high above a cliff.

Mountain Village is the main area that leads to all of the prominent locations of Snowhead, so Link must pass through here in order to access the other regions. The east leads to the Goron Village, while the west yields a path towards Snowhead and ultimately the Snowhead Temple itself. Once spring has returned to Snowhead, there is a shortcut through the mountain connecting Mountain Village and Goron Village. Although full of Boes, they are easily defeated.

Road to Goron Village[2] lies in the center of Snowhead, leading to the Goron Village. This road contains the Twin Islands,[3] which resemble Spectacle Rock. During the winter, they are surrounded by a frozen lake and connected to the shore by a series of bridges which are guarded by a pair of White Wolfos. The Goron Elder can be found on the surface of the lake, frozen and covered by a buildup of snow. Once Snowhead Temple is cleared and spring is returned to the mountains, Link is able to access a Piece of Heart on the bottom of the thawed lake as Zora Link. On a cliff overlooking the Twin Islands, the Goron Races are held.

The residence of the Gorons, the Goron Village is accessible via a series of rope bridges across the Twin Islands. The village is home to the Goron Shrine, which is where most of the Gorons have been staying in due to the extreme cold. Here, Link can learn more about the Goron Elder and his son. Also in the village is a Goron who sells Powder Kegs to those authorized to use them. Finally, by speaking to the Business Scrub in the area as Goron Link, he will upgrade the Bomb Bag for 200 Rupees.

Goron Shrine is a dome-like refuge where the Goron tribe lives during winter. It used to provide a relaxing heat during the season, but the torches are not lit anymore. Also, given the Goron patriarch's absence, as well as Darmani's, the Elder's son cries loudly, much to the other Gorons' annoyance. 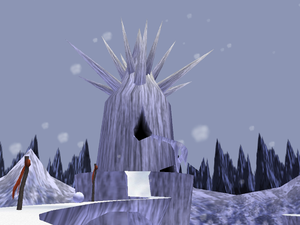 The Snowhead Mountain in Majora's Mask

Snowhead Mountain, being overcome with strong blizzards, is a threat to anyone who is not fully prepared for its many dangers. It is here that Darmani lost his life due to being blown away by the strong chilly winds. Using the Lens of Truth, Link discovers that the blizzards are being caused by Biggoron, a giant invisible Goron, who is unaware of all the chaos he has been causing to the mountain. Playing the "Goron Lullaby" on the Goron Drums successfully puts this Goron to sleep, allowing Link to access the top of the mountain and enter its temple, the Snowhead Temple.

Snowhead Mountain is notable for its high population of Ice Keese and White Wolfos.

A very large course where Gorons participate in a race during the spring. Unfortunately for the contestants (and particularly for the Elder's son), the entrance is blocked by a huge boulder that can only be demolished by a Powder Keg.

Link can receive a Bottle filled with Gold Dust by clearing the Goron Races once spring returns to the mountains. This Gold Dust can be sold to the Blacksmith in the Mountain Village for 40 Rupees, or at the Curiosity Shop for 200.[4] It can also be used to upgrade the Razor Sword to the Gilded Sword.