The Skyview Temple,[1] sometimes referred to in-game as the Forest Temple,[citation needed] is an ancient structure that serves as a temple in Skyward Sword. Its mini-boss is a Stalfos, and the main item obtained is the Beetle.

To reach the Skyview Temple, Link must make his way through the Deep Woods area during his search for Zelda. After aiding Bucha, the Kikwi Elder, in locating the missing Kikwis, Link will be given the Slingshot. Bucha will also tell Link that he saw a young girl that looked just like him heading towards Skyview Temple.[2] He can use the Slingshot to open the path to Deep Woods, which leads to the Skyview Temple. However, the door leading inside the Dungeon is sealed shut. To open the door to the temple, Link must hit a Crystal Switch above the entrance by using his Slingshot. After hitting the switch and unsealing the temple's entrance, the young hero ventures into the Dungeon. 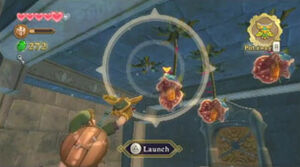 The Skyview Temple, true to its location, has a forest motif. It is a network of gloomy passages in which luminescent plants and fungi grow. Several parts of its internal architecture are in ruins, and the last room even houses a large chasm Link crosses with the help of vines he can untie with the help of the Slingshot. The Dungeon only has one floor, but it makes up for it with the huge size of its rooms, as well as the large variety of enemies that inhabit the temple.

The temple often requires Link to hit Crystal Switches with the Slingshot to change the water level; raising the water levels will allow the hero to access new passageways, which lead deeper into the Dungeon. Later, after defeating a Stalfos mini-boss, Link will be rewarded with the Beetle, a mechanical insect-shaped tool he can pilot towards inaccessible spots, which allows him to hit certain Crystal Switches he could not before, in turn allowing him to open doors that lead to new rooms or even collect a Piece of Heart. It also grants him the ability to cut certain ropes and webs around the Temple, creating paths and shortcuts, making crates fall to the ground, making Skulltulas directly vulnerable to terrestrial attacks, and defeating Deku Babas by cutting their stems.

The boss of the Temple is Ghirahim, who is defeated by avoiding striking his guard with Link's sword, or by countering one of his attacks. Upon learning that Zelda's presence from the temple has faded, the Demon Lord teleports away, leaving behind a Heart Container for Link to collect.[3]

Upon exiting the temple, Link comes across the scenic Skyview Spring. Link intends to find Zelda at the spring, but his fight with Ghirahim prevents that. At the end of the spring, Link encounters a crest, similar in appearance to the Sacred Crest found in the Chamber of the Sword. After the young hero activates the crest, Fi informs him that she has a message from the gods of the old and begins to translate it for him. The translation states that the spirit maiden, known as Zelda has set off for a second sacred place similar to Skyview Spring, known as the Earth Spring.[4][5] After the translation is complete, Link receives the Ruby Tablet which creates a rift in the clouds leading to Eldin Volcano. 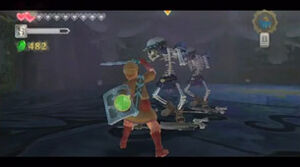 The three Stalfos fought at the end

Uniquely among the Dungeons in Skyward Sword, the Skyview Temple must be returned to at least once. Upon meeting Faron, the Water Dragon, she informs Link that she has been gravely injured while defending Lake Floria from Ghirahim's minions. She asks the young hero to retrieve more Sacred Water from Skyview Temple's Skyview Spring because her water has lost its special healing, and says that she will reveal the location of Farore's Sacred Flame to the hero in return.[6] Although it is not necessary to visit every part of the Dungeon again, the route to the spring is not completely straight and uninterrupted, as some pathways have been blocked off, necessitating new solutions to previous puzzles. Additionally, new and stronger enemies appear to have infested the temple, including Froaks and many Bokoblin Archers.[7] Upon reaching the room where Link fought Ghirahim the first time around, he must now take on a trio of Stalfos. After retrieving the Sacred Water and giving it to Faron, she becomes healed and in turn, she grants Link access to the Ancient Cistern.