Skipper's Retreat is a location in Skyward Sword.[1] It is where Captain Skipper, the Ancient Robot, lived many years in the past. Link and Skipper visit the area in search of the Ancient Sea Chart while on their quest to find the Sandship.[2] The area is made of tall rock spires, which require the use of the Whip and Clawshots to get around the small island. 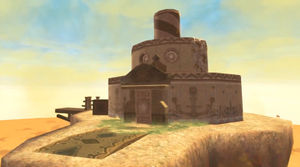 Skipper's Retreat is located in the Lanayru Sand Sea, and like most of Lanayru Province, it is dry, sandy, and bereft of life in the present. Skipper's Retreat is composed of a large number of rock spires jutting out of the sea of Sinksand below. To get around the area, Link has to use his Clawshots to hook on to the native Peahats and targets located around him. There are also ziplines that the young hero can use as a shortcut back to the dock where the ship is located.

The first time Link visits Skipper's Retreat is when he is looking for the fabled Sandship which contains Nayru's Sacred Flame. Skipper, the captain of the fabled Sandship, informs Link that there is a sea chart inside its house that could lead them to the ship.[2] Link eventually travels up to the tallest spire where Skipper's house is located, using the Gust Bellows to find the sea chart. Fi recommends dealing with the bug infestation within the shack before finding the sea chart.[3]

The island is one of the few homes of the Sand Cicada, presumably being a part of the bug infestation within Skipper's home. Some broken-down Ancient Robots can be found inside Skipper's house, possibly being its family or friends.