The Sinking Lure is a recurring item in The Legend of Zelda series.[1]

In Ocarina of Time, Link can only use the regular lure to catch fish since Sinking Lures are strictly prohibited and will grant the Fishing Hole Man the right to deny the young hero a prize.[2] Because of this, the Sinking Lure does not appear in the past until young Link has obtained the Piece of Heart, and it will not appear in the adult era until the Golden Scale is won. These prizes can be received by besting the current Fish record by at least four pounds: if the current record is 9 pounds as Adult Link, then at least a 13-pound Fish must be caught to obtain the Golden Scale as a reward and unlock the Sinking Lure as an adult.

Once Link obtains the prices, the Sinking Lure can be found in four different places around the Fishing Pond. Its location changes almost every time Link enters the Fishing Pond. To obtain the Lure, Link must walk up to these places while carrying the fishing rod:

If, after collecting the lure, Link takes it to the owner and chooses 'Let's talk about something', the owner will allow Link to use the Lure for his honesty.[3] Despite this, the owner will still deny Link a prize for any record-breaking Fish he catches with the Sinking Lure.[2] Once the young hero exits the pond, he will have to search for the Sinking Lure again before he is able to use it. 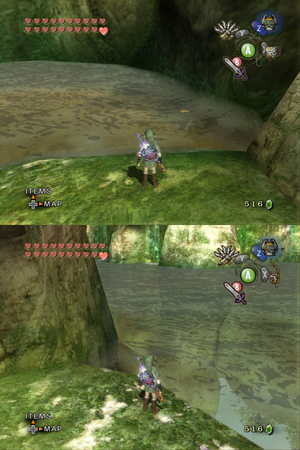 In Twilight Princess, the lure is a bit harder to find and harder to get. First, Link must catch one of each type of fish in Hena's Fishing Hole while lure fishing to get the sinking lure to appear. That includes the Hyrule Bass, Hylian Pike, and Ordon Catfish. Moreover, the young hero must have obtained the Coral Earring. Once Link has caught all of these Fish and has the Coral Earring, he can obtain the Lure. The Lure is located either at the highest point of the east bank or westernmost part of the south bank of the fishing hole. The line must be cast until the line is taken like it would with any other Fish. The Sinking Lure will eventually get hooked and will be added to the young hero's arsenal of Lures.

Like the Frog Lure, Link must let the fish nibble on the Sinking Lure for a few seconds before trying to hook the fish, otherwise the fish will escape. Although using the Sinking Lure is prohibited within the pond,[4] Hena cannot tell Link has been using it unless Link uses the lure while she is with him as a guide. Should Hena see the lure, she will immediately confiscate it;[5] however, Link can obtain another Sinking Lure in either of the same locations as before, the sinking lure seems to be modelled after a "Spoon Lure".

In Majora's Mask 3D, the Sinking Lure is available as an option along with the normal lure when fishing at either of the two Fishing Holes.[6]

Lures in The Legend of Zelda series
Retrieved from "https://zelda.gamepedia.com/index.php?title=Sinking_Lure&oldid=775351"
Categories:
Hidden categories: