Sing is a character appearing in the episode "Sing for the Unicorn" of The Legend of Zelda TV series. She is from a far away land who has come to Hyrule to rescue her Unicorn after it was stolen from Ganon.[1] Her weapon of choice is the sai. 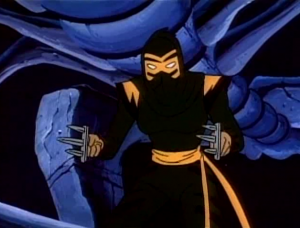 Sing's first appearance in the episode

Link and Princess Zelda first meet Sing when they are in the Underworld fighting Stalfos. When a Stalfos grabs Link from behind, a mysterious warrior suddenly appears and zaps the foe, along with the rest of the Stalfos, using her sai. However, she soon begins to target Link as well.[2] Although the young hero attempts to shoot the warrior with a sword beam, he realizes that the disguised attacker is a human since the beam did not cause it to vanish.[3] Zelda then grabs the warrior and Link removes its mask, showing that it is a woman who does not speak Link and Zelda's language.[4] Zelda is able to communicate with her and reveals that her name is Sing, who is trying to rescue her unicorn that Ganon stole.[1] Link agrees to help her and uses a bomb to blast his way into Ganon's lair, where together they continue to look for Sing's unicorn as well as King Harkinian who was captured earlier on.[5]

Eventually, the heroes find that the Unicorn is being guarded by Moblins, which Sing easily defeats by zapping them away.[6] With her unicorn rescued, she uses it to save King Harkinian from his doom in a so-called pit room.[7] With everyone now safe, Link uses a magic whistle to warp everyone out of the Underworld, including Sing. At the end of the episode, Sing waves goodbye to the King, Zelda and Link as she's riding away on her unicorn.