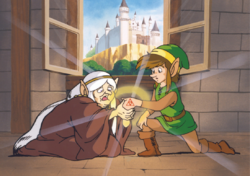 Because Impa is a Sheikah in Ocarina of Time,[1] it is possible that the Impa featured in The Legend of Zelda and The Adventure of Link may also be a Sheikah as well, even if the race had not yet been introduced when these games were released. In The Adventure of Link, when Impa reveals the location of the sleeping Princess Zelda to Link, she makes reference to an "Impa Family" that had served the Royal Family for generations and had the power to open the door to the princess's chamber.[2] This would mean that, via retcon, the Impa from the early games may be a Sheikah, though this has yet to be confirmed by Nintendo or its associates. In both of the games, the Impa featured does share some similarities with her successors in the series, such as her knowledge of the kingdom of Hyrule, Ganon, and the history of the Royal Family.

It has been speculated by some that the Sheikah have some connection to the shadowy magicians known as the Dark Interlopers, the ancestors of the Twili that were banished to the Twilight Realm by the Golden Goddesses when they attempted conquest of the Sacred Realm.[3] The physical similarities between the two tribes have been noted, as the Dark Interlopers and the Twili both have the characteristic red eyes common amongst the Sheikah tribe and are skilled in "shadow magic", which was the forte of the Sheikah, who gained the title of the "Shadow Folk" due to this relationship to the element of shadows.[4] 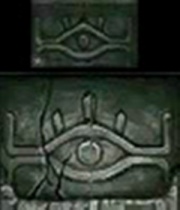 One piece of evidence highly cited by supporters of this theory is the presence of a similar Eye Symbol (somewhat akin to Agahnim's symbol) atop the throne of the Twilight Realm's ruler and on the back of the Fused Shadow, the weapon wielded by the Dark Interlopers during their conquest for power.[5] Some even go so far as to suggest that the Dark Interlopers were in fact a sect of the Sheikah themselves, explaining their race's disappearance from Hyrule in one timeline and explaining why such a symbol would appear on the throne and on relics of the residents of the Twilight Realm. The fact that this symbol lacks the characteristic tear is also noted by theorists, who argue that this is perhaps the Sheikah emblem as it originally was and that those few that had not gone along with the Interlopers' schemes altered the symbol later to commemorate the sorrow they felt due to the actions of their comrades, though this is unconfirmed by any official source.

It has been noted by others that the Sheikah have often been portrayed as loyal servants of the Royal Family,[6] in stark contrast to the Dark Interlopers, who let their greed corrupt their actions, thus complicating any theorized connection between the two. However, the Sheikah tribe's complete history is not known, leaving room for speculation as to whether they ever experimented with dark magic as did the Interlopers. While this is possible as nothing seemingly rules this out entirely, due to the incomplete information available about the tribe, it cannot be said with any degree of certainty whether or not the Sheikah took part in actions comparable to the Interlopers or had any dealings with them. Several other non-Sheikah villains like Vaati and Veran have also used Eye Symbols as well, leaving the question of a relationship to the Sheikah open to debate.

The Eye of Truth and Bongo Bongo 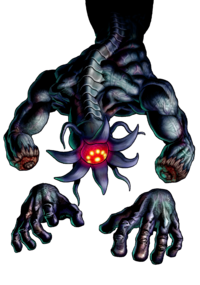 Speculation has arisen amongst some fans of a connection between Bongo Bongo and the creator of the so-called "Eye of Truth", properly called the Lens of Truth. According to an old man in Kakariko Village, there was once a man that resided in the village that was said to have created an item that would enable the wielder to "see the truth", this item later being revealed to be the Lens of Truth. What makes this story so interesting however is that the old man mentions that the man who invented the Lens of Truth (thought to have been a Sheikah himself as he lived in the Sheikah village and created a Sheikah relic) once lived in a house that was built where the Kakariko Well now stands.[7] This well was also where, some time before the events of Ocarina of Time, Impa had sealed the Phantom Shadow Beast Bongo Bongo away, to be forever imprisoned at the Bottom of the Well so he could not wreak havoc upon the village.[8] It was also here that the Lens of Truth was discovered to have been hidden, in the deepest recesses of the Bottom of the Well, which bore great resemblance to the interior of the Shadow Temple. It is ironic also that the Lens of Truth were necessary to defeat Bongo Bongo himself in battle.[9] 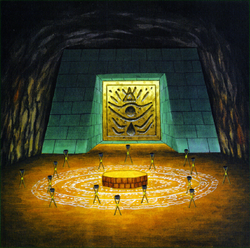 The entrance of the Shadow Temple

Bearing multiple references to the Sheikah both inside and out, the Shadow Temple, also known as the "House of the Dead",[10] is strongly tied to the tribe. One of the most obvious references to the Sheikah is the great stone door that serves as the gateway into the temple, as it bears the Eye of the Sheikah. Inside, multiple references are made by mysterious walls to the "Eye of Truth",[11] better known as the Lens of Truth, a Sheikah artifact. Several puzzles involving seeing the truth of a situation are also presented throughout the temple and require the use of the Sheikah heirloom. The Sage of Shadow herself is a Sheikah as well, Impa.[1] All these references and signs have brought a great majority of fans to believe that the Shadow Temple was a creation of the Sheikah tribe and perhaps once served as a place of worship for them.

Questions have arisen as to just what the intended purpose of the Shadow Temple truly was however. Though it almost certainly was built to pay homage to the element of shadows, some have come to speculate that it had other purposes as well. All throughout the temple, what appear to be torture devices and prison cells appear, giving a strong inference that death was perhaps a large force behind the temple's purpose. This is further supported by the temple's nickname, the "House of the Dead".[10] Due to a statement made by one of the mysterious walls within the temple, it has been speculated that the temple was meant to serve as the place where all of Hyrule's dead go to take their eternal rest, somewhat similar to the Underworld spoken of in Greek mythology.[12] It is also a possibility that the temple was used as an interrogation or torture dungeon for enemies of the Hylian crown. There are others that also believe that, because of the very same statement made by the wall, that the Shadow Temple was meant to act as a magnet to draw in all greedy or malevolent thoughts from Hyrule's populace and thus help maintain order throughout the land by taking that negative energy away. None of this has been officially confirmed by Nintendo however, leaving such ideas up for debate.

The Trinity of Truth 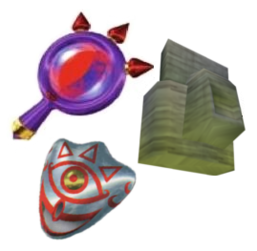 The Trinity of Truth

According to the theory of the Trinity of Truth, the trinity is a trichotomy of human perception that stems from the Ocarina of Time Kakariko Village relics: the Lens of Truth, the Stone of Agony, and the Mask of Truth, all of which stemmed from the Sheikah race. These three objects, when used at the same time, give the holder the ultimate perceptionary advantage not only over one's counterparts, but over the many lands and temples found in Ocarina of Time and partly in Majora's Mask. The Lens of Truth gives the holder an all-seeing-eye to discern fake walls, chests, and even bosses (i.e. Bongo Bongo)[9] in order to save their life from the dangers they normally may not see.[13] The Stone/Shard of Agony gives off a touch-sensitive silent rumbling whenever its holder is near a Secret Grotto, which is a common avenue for achieving extra Rupees or Heart Containers in some cases, extending life.[14] The Mask of Truth discerns the words of the Sheikah Gossip Stones, giving its wearer invaluable information concerning their quest as well as some humor along the way.[15]

These three objects are seen by some as an "earthly" representation of the Triforce: three distinct powers that, when brought together, give the user extreme power and knowledge, without any godly connotations. As the Triforce is the heavenly embodiment of Power, Wisdom and Courage, these three objects are thought by some to embody human fantasy qualities of "absolute sight", "absolute instinct", and "telepathy". These man-made objects are also thought by some to work in tandem with Triforce holders, such as Link in this case, in order to make the wielder not only able to physically fight against anything that comes their way, but to literally "see" the adversity coming as well.