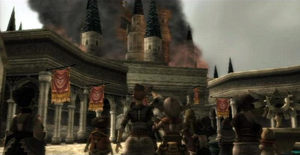 The Shadow Invasion is the name of a large-scale invasion launched against the land of Hyrule by Zant, the usurper King of Twilight featured in Twilight Princess. 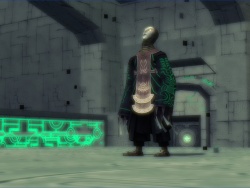 Zant is awestruck when he meets Ganondorf for the first time.

Over a century after the Twili's exile from Hyrule, the Twilight Realm entered a period of political instability when an evil Twili named Zant usurped the throne from the true heir, Princess Midna. Zant had been a servant of the Royal Family of the Twilight Realm, and was embittered that he was not chosen as the heir to the throne.[1] With the ascension of Midna to the title of Twilight Princess, Zant became emotionally unstable and severely depressed. It was in this state that he was approached by the spirit of Ganondorf, who posed as a god and offered an exchange: he would give Zant the power to take the throne by force, and once he was secure as the ruler of the Twilight Realm, Zant would release Ganondorf back into Hyrule.[2][3][4]

The Invasion of Twilight 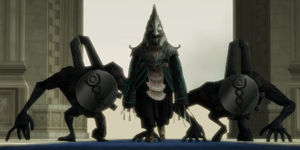 Zant opened the gateway between the two worlds and used his sorcerous powers to shroud the areas he conquered in Twilight. Zant first targeted three of the four Light Spirits that had been responsible for locking the Dark Interlopers away in the Twilight Realm long ago. He sent his Shadow Beasts to steal their light and divide it up amongst a multitude of Shadow Insects that would scatter around the provinces of Hyrule.[7] The Twili army conquered province after province with ease until they reached Hyrule Castle.

The Twili army eventually reached the gates of the fortified Hyrule Castle Town itself. Zant marched into the throne room with Shadow Beasts following him. The soldiers who tried to defend the room were easily subdued. Princess Zelda raised her rapier sword as a final form of defense, but Zant threatened to kill all of her subjects if she did not comply with his order to abdicate the throne to him.[8]

Zelda, not wishing to risk the lives of her people against seemingly impossible odds, dropped her rapier sword as a sign of surrender, and abdicated the throne to Zant. During this assault, Hyrule Castle was set ablaze. Then, Twilight surged from Hyrule Castle, turning the watching residents of Hyrule Castle Town and the majority of Hyrule's population into hopeless light spirits, unaware of what had happened to them.[9] With this, Hyrule was under Zant and Ganondorf's control. Zant kept Zelda prisoner in a room at the top tower of the castle.

With the exception of Ordona, who is saved by Link when a Shadow Beast comes to steal her light, the Spirits of Light lose their power when their light is seized by the Shadow Beasts. This brings direct effects that affect the environment of the local provinces. In Faron Woods, a purple toxic fog impedes direct access to the Forest Temple and, even after the province recovers from twilight, remains as a permanent effect. In Death Mountain, the surrounding volcano shows a fiercer-than usual activity, which results in the fall of tectonic material into the Gorons' whereabouts, endangering them. Zora's Domain, as well as surrounding areas like Zora's River and Zora's Waterfall, are frozen; this results in the Zora population being trapped inside the ice and Lake Hylia's water level decreasing drastically.

After Link is told to find a way to restore light to Hyrule, he explores the affected provinces one by one in order to retrieve the Tears of Light and give the Spirits the ability to expunge the influence of twilight in their respective regions. Every time the young hero enters a darkened region, he is transformed into Wolf Link, but recovers his Hylian form when light returns to said region. After managing to retrieve the pieces of the Mirror of Twilight and infiltrating the Palace of Twilight, Link finds Zant, who reveals that a god came down to him, and lent him his power. Zant battles Link, replicating all of the boss rooms in the past dungeons, but Link defeats him. Zant reveals that Midna cannot return to her true form, since the power he used to transform her into an imp belongs to Ganondorf. In her fury, Midna uses the newly retrieved Fused Shadows to create large spears, which impale Zant and cause him to explode.

Link goes to Hyrule Castle, and Midna uses the Fused Shadows to smash the Twilight pyramid surrounding the castle. Link enters the castle and finds Ganondorf with a catatonic Zelda in the throne room. Ganondorf gloats Link and Midna, and then possesses Zelda to battle Link. Link wins the battle, and Midna forcefully takes Ganondorf's essence out of Zelda using the Fused Shadows. Ganondorf transforms into a large boar-like creature and battles Link again, but is once again defeated. Midna opens up a Twilight Portal and sends Link and Zelda through it, choosing to fend off Ganondorf herself with the Fused Shadows.

After teleporting to Hyrule Field, Link and Zelda believe their problems to be over, but a large explosion destroys the castle, and Ganondorf appears on his horse, holding Midna's helmet aloft, symbolizing her defeat. Link and Zelda fight Ganondorf on Epona, and Link emerges victorious again. Ganondorf then has a sword duel with Link, and the latter drives the Master Sword into Ganondorf's chest. Injured, Ganondorf sees the Triforce of Power disappear from his hand and sees Zant, whose neck snaps to one side. Ganondorf then presumably dies while standing in place. The Light Spirits revive Midna, who regains her true form.