Shadow Battles are multiplayer Battle Modes featured in Four Swords Adventures. The battles differ from the main Hyrulean Adventures mode in that four Shadow Links fight one another, rather than the usual cooperative gameplay. This aspect of Four Swords Adventures is only playable with 2-4 players; all of whom must use a Game Boy Advance.

The following handicaps and rules can be enabled to balance gameplay for players of differing experience levels.

All of the Battle Arenas are small areas with a few Game Boy Advance-specific areas as well as a central screen. Five alternate "Dark World" versions of the stages are unlocked upon completing the Hyrulean Adventure mode. The dark version of each stage is similar to its counterpart, but the field of view is much smaller. There are also different environmental hazards, traps, and enemies between versions. 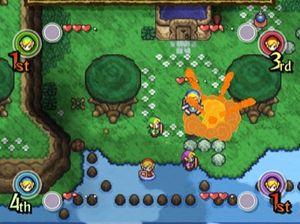 The Links battling in The Field

The central area for this stage consists of a grass covered shore side field. A single hut and a cave along the cliff edge serve as sanctuary from the larger arena. Switches found in high grassy areas can open trapdoors, surround items with bombs, or summon monsters. Other effective considerations are that ramming the house will summon 3 soldiers, ramming the tree will arouse its bees, and provoking the cuccos will cause an angry swarm to descend on Links left outside.

The Field (Dark) is the same area; the one difference is that switches are relocated.

As its name suggests, this stage is dominated by lava, fireballs, and explosives. Rooms at the north and south walls, as well as a sub-floor room provide the safety from the central area hazards. Raging fires and a mad chain reaction with the bombs lining the lava make this the most chaotic stage of all.

Tower of Flames (Dark), in addition to the limited visibility, the switches drop bombs even in the offshooting rooms.

The only side-view stage to battle in. The stage is set up as a network of doors and ladders. The doors are portals to the Dark World. The Dark World allows for a few nasty antics such as dropping a Big Bomb on screen.

Tower of Winds (Dark) offers more switches and a rain of bombs attack.

This stage is a simple courtyard with soldiers that join the battle. The Dark World portals are time-limited areas. Link warps back to the Light World after 10 seconds. Grabbing items and tossing other Links into harm's way are the best use of the portal.

Hyrule Castle (Dark) offers more switches to unleash a swarm of bombchu to the Light World.

This stage is a rectangular cloud with an obvious falling hazard. Rotating flame pillars and color specific tiles make this stage difficult to traverse. A room below the cloud contains a switch to reverse the fiery arms rotation and a cannon to launch a menacing down thrust from. Battles here tend to end quickly due to the ease of simply throwing Links off the cloud.

Above the Clouds (Dark) gives the pillars 4 arms instead of 2, but no other differences.