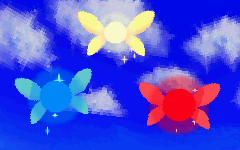 From left to right, Neri, Ciela, and Leaf, the three Servant Spirits

The Servant Spirits are key characters who appear in Phantom Hourglass.[citation needed]

The Servant Spirits who serve the Ocean King are Ciela, Leaf and Neri. They are the guides that Link needs to find the Ghost Ship, as when all three spirits are gathered, they can see through any evil illusion. They can also grant Link access to further areas in the Temple of the Ocean King.

Ciela is the first fairy whom Link finds. She begins the game as a white fairy, and later takes on a yellow shade when she is completed. She finds Link comatose on the beach of Mercay Island and takes him to Oshus. After Link defeats the boss of the Temple of Courage, a fairy similar to Ciela appears, and Oshus reveals to Link and Ciela that Ciela is actually the Spirit of Courage, who had split her being in order to escape Bellum. Oshus then recombines the two. During the battle with Bellum, the part of Ciela that had been devoured by it is returned, and she regains her memory and powers as the Spirit of Courage and Time. By offering Courage Gems to the goddess that dwells in Spirit Island, Ciela can grant Link the ability to perform wind-based Sword Beams.

Leaf is the red Spirit of Power. He is obtained upon defeating Blaaz. By offering Power Gems to the goddess that dwells in Spirit Island, Leaf can grant Link the ability to double and then quadruple his offensive capability by wrapping his sword in flames.

Neri is the blue Spirit of Wisdom. She is obtained upon defeating Cyclok. By offering Wisdom Gems to the goddess that dwells in Spirit Island, Neri can grant Link the ability to double and then quadruple his defensive capability by shielding him in a watery bubble.