Searchlights are recurring Objects in The Legend of Zelda series.[1][name reference missing] They are devices used by enemies to detect Link's presence. They appear in the Forsaken Fortress in The Wind Waker and in the Infiltration of Hyrule Castle stage in Four Swords Adventures. Both places are, fittingly, locations Link tries to infiltrate. Link must use Stealth to avoid being seen by the Searchlights. 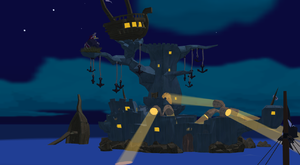 The Forsaken Fortress is well guarded thanks to the Searchlights

One of the Searchlights shines directly on the ledge beneath the window of the chamber where Aryll, Maggie, and Mila are held captive. Link must disable that Searchlight to sidle across the ledge and reach the upper section of the Forsaken Fortress. Disabling the other two pairs of Searchlights is optional.

Searchlights appear at the beginning of the Infiltration of Hyrule Castle stage in Four Swords Adventures. They peer over the Castle walls as the Links try to find a way into the castle. Much like in The Wind Waker, if one of the Links is spotted, an alarm will be sounded and Link will be thrown in jail.

The Links can avoid detection from the Searchlights by diving underwater as it passes over them. If a Jar is shattered, the Searchlights will promptly converge at the source of the sound. Although this may cause the Links to be captured, it can also be used as a decoy to sneak past the Searchlights; if it is thrown away from the Links it will create a distraction for them when it shatters.