The Salvage Arm is an attachment for the S.S. Linebeck in Phantom Hourglass. 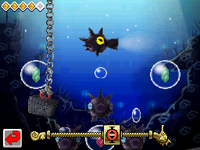 The Salvage Arm pulling up a Treasure Chest

The Salvage Arm is bought from Eddo at his garage. Unlike the Cannon, the price of the salvage arm varies between 200 and 1,000 Rupees and is determined by how loud Link yells (by using the Nintendo DS microphone).[1]

The Salvage Arm allows Link to pull Treasure Chests off the sea floor. Once a Treasure Map has been found and occasionally when a Pirate Ship is sunk, an 'X' mark will appear on the Sea Chart. This is where treasure can be found. If Link tries to salvage somewhere with no mark, though, he won't get any treasure. Once Link activates the Salvage Arm, the young hero enters a mini-game in which he must lower and retrieve the claw while avoiding obstacles such as rocky walls and Octomines, an underwater form of Octorok. There are also Rupees in bubbles that can be collected. Once Link reaches the treasure on the seabed, the young hero must to pull it back up, again dodging the obstacles.

The Salvage Arm has a life gauge. It has five life points which are reduced by one for every obstacle hit. If Link damages the Salvage Arm, it can be fixed by Gazpacho in the Shipyard on Mercay Island for 20-50 Rupees.[2][3] If Link damages to the point where it has no life points left, it breaks and needs to be repaired by Gazpacho for 100 Rupees before it can be used again.[4][5]