The Sail is a recurring Item in The Legend of Zelda series.[1]

The Sail can be purchased from Zunari on Windfall Island for 80 Rupees. It allows Link to catch prevailing winds to sail from island to island. It can only be used while onboard the King of Red Lions. If the Sail is used in an area with no wind, it will have no effect on the King of Red Lions. In The Wind Waker HD, the Sail is a quest item instead of a regular item, eliminating the need to assign it to a button to deploy it.

In The Wind Waker HD, the Sail can be upgraded to the Swift Sail, which enables the King of Red Lions to sail faster. It also automatically changes the direction of the wind to whichever the boat is facing. This eliminates the need to conduct the "Wind's Requiem" when sailing.[2] The Swift Sail is activated by pressing the A Button while the normal Sail is deployed, and can be changed back to the normal Sail by pressing A again.

Link can obtain the Swift Sail from the Auction at the Auction House on Windfall Island after acquiring the Wind Waker. 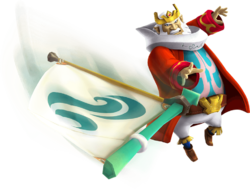 In Hyrule Warriors, the Sail is a class of Weapon used by King Daphnes. It is associated with Water. It allows King Daphnes to transform into the King of Red Lions as part of his moveset.

The default Sail is the Windfall Sail. The second form of the Sail is the Swift Sail, followed by the Sail of Red Lions.

In Hyrule Warriors Legends only, the fourth form of the Sail is the Supercharged Sail, which is associated with both the Elements of Water and Lightning.

King Daphnes summons a huge tidal wave beneath him, gaining altitude with it. Once it gains enough altitude, he transforms into the King of Red Lions and pushes the wave forward, smashing enemies in front of him caught by the water. This attack hits enemies in a rectangular pattern in front of Kind Daphnes.