It has been suggested that the portion of this page concerning Royal Jewel should be made into its own page. Should the target page already exist, this content should be merged into it where appropriate. Discuss this on article's talk page.

The Four Elements,(TMC)[1] also known as the Royal Jewels,[citation needed] are recurring Items in The Legend of Zelda series. They are the crystalline forms of energy the world depends on.[2] They were first shown in Four Swords, but their significance was not revealed until the later games Four Swords Adventures and The Minish Cap. They are based on the classical elements. 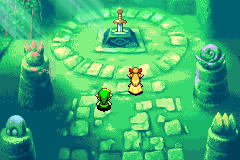 The Four Elements can be briefly seen in the introduction sequence of Four Swords, in front of the altar where Vaati is sealed. The upper parts of the Keys received from Great Fairies are also designed after them.

In Four Swords Adventures, the Four Sword Sanctuary lies in ruins and only a few remains lay on the Royal Jewels' pedestals. The Links need them in order to gain entrance to the Tower of Winds to save Princess Zelda.[3] They were in the possession of the spirits of four Knights of Hyrule, who were cursed to roam as Stalfos in the Dark World until the Links freed them. By doing so, the Four Elements, which were also cursed and turned into gates to the Dark World, were cleansed.[4]

In The Minish Cap, the importance of the Four Elements was revealed. They are the source of power of the Four Sword, each Element granting the wielder of the sword another "clone". In order to save Princess Zelda and stop Vaati, Link had to find each Element, scattered in four Dungeons throughout Hyrule. Each time he finds a new Element, Link brings it to the Elemental Sanctuary to infuse into his sword.

The Earth Element is the first of the Four Elements to be gathered in The Minish Cap. It is obtained in Deepwood Shrine in the Minish Woods, and is needed along with the Fire Element for Link to make the White Sword from the reforged Picori Blade.

In Four Swords Adventures, it is called the Purple Royal Jewel and is the fourth Element Link obtains.

The Fire Element is the second of the Four Elements gathered in The Minish Cap, obtained in the Cave of Flames on Mount Crenel. This, along with the Earth Element, is needed for Link to create the White Sword from the reforged Picori Blade.

In Four Swords Adventures, it is called the Red Royal Jewel and is the third Element Link obtains.

The Water Element is the third of the Four Elements collected by Link in The Minish Cap. It is found in the Temple of Droplets in Lake Hylia. Its power is infused into the White Sword.

In Four Swords Adventures, it is called the Blue Royal Jewel and is the first Element Link obtains.

The Wind Element is the fourth and final of the Four Elements gathered in The Minish Cap. Once infused into the White Sword, it becomes the legendary blade, the Four Sword. Although expected to be found in the Fortress of Winds after defeating Mazaal, it is instead located in the Palace of Winds among the Cloud Tops.

In Four Swords Adventures, it is called the Green Royal Jewel and is the second Element Link obtains.

Jewels in The Legend of Zelda series
Retrieved from "https://zelda.gamepedia.com/index.php?title=Four_Elements&oldid=828611"
Categories:
Hidden categories: