From Zelda Wiki, the Zelda encyclopedia
(Redirected from Rod of the Heavens)
Jump to: navigation, search

The Dominion Rod,(TP)[1] also known as the Rod of the Heavens,(TP)[2] is a recurring Item in The Legend of Zelda series.

There are four types of statues Link can move with the Dominion Rod. The first type are small statuettes in the Temple of Time that are mainly used to weigh down Switches. The second type is a much larger statue that holds a hammer, which Link must guide through the Temple to its original position. These statues can attack enemies with their hammers. The third type of statues are gigantic statues found only in one room that Link must use to defeat Armogohma. They are completely stationary, but can attack by slamming a large fist onto the ground. The last type are Owl Statues, the only statues located outside the Temple of Time. They are primarily moved to obtain the missing Sky Characters, or to create platforms for Link to jump on.

Once Link leaves the Temple of Time, the Dominion Rod loses its power.[8] After receiving the Ancient Sky Book containing sky language and giving it to Shad, he will read the text, only to fail to open the path that leads to the heavens. However, the ancient text he reads is a spell which restores power to the Dominion Rod.[9] Link must then travel across Hyrule to various Owl Statues, using the Dominion Rod to move them. Under each one, a Sky Character can be found, which Link needs to acquire to complete the book. 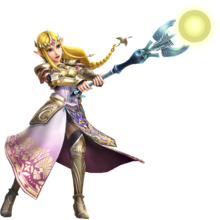 In Hyrule Warriors, the Dominion Rod is a class of Weapon used by Zelda. It is associated with Darkness. It was added to Hyrule Warriors with the Twilight Princess Pack DLC. In Hyrule Warriors Legends and Hyrule Warriors: Definitive Edition, it can be unlocked in the base game. It allows Zelda to summon different statues that affect her combos and normal attacks. When using them, the statues will fight alongside Zelda. Furthermore, every statue has slightly different properties.

Zelda summons an Owl Statue from the ground a short distance away, knocking enemies into the air. The attack then summons a hammer-wielding statue, which swings its mallet from the side, sending the enemies far into the distance while Zelda peers to see how far they flew. This attack hits a circular area in front of Zelda.