The River Man is a character from The Adventure of Link.[1]

Another River Man can be seen on the other side of the bridge. 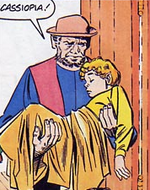 The River Man in the comics

When Ganon comes to the Water Town of Saria to gain the trust of the townsfolk, he speaks to the River Man's son, Rus, in particular, acting as a father figure. The River Man believes Ganon's words, and thus when Link and Princess Zelda visit the town, he does not trust them.[6] When Ganon attacks Link, and Rus grabs the Magical Sword and refuses to give it to Ganon, the evil wizard tries to attack Rus, which makes the River Man realize his mistake.[7]

In a later edition, after Cassiopia returns from the North Palace where she informed Zelda that Lynels had attacked the town, the River Man reveals to her that Rus has been gravely wounded by a Rope Snake's bite.[8] Desperate, Cassiopia confesses that Rus is beyond her healing powers and that he will not last beyond sundown,[9] but just then Zelda tells her that she will go to the Magic Spring and bring a fairy to cure the boy.[10] Although Cassiopia wants her to go,[11] the River Man insists that Zelda go and destroy Ganon instead, for who knows how many other children will die if the Prince of Darkness is not stopped once and for all.[12] When Zelda changes her mind and chooses to get out of Death Mountain to save the River Man's son, she is ambushed by Ganon's minions, but the River Man and soon all of the villagers from Saria, who had been hiding out in a nearby cliff, begin to help Zelda defeat the monsters.[13] Back at the town, Zelda asks Miff to cure Rus, and the River Man thanks the princess for all her help.[14]

Swordsmen in The Legend of Zelda series
Retrieved from "https://zelda.gamepedia.com/River_Man?oldid=809460"
Categories:
Hidden categories: