The Rito are a recurring race in The Legend of Zelda series.[2][4] They are people who possess avian features, including wings which give them the ability of flight. In The Wind Waker, they are primarily humanoid with few bird-like traits. In Breath of the Wild, Rito have adopted completely avian forms.

In The Wind Waker, the Rito are an evolved form of the Zoras who have gained the ability to fly.[5]

The Rito are primarily avian in appearance, possessing wings, a beak and talons. The range of their avian characteristics varies between The Wind Waker and Breath of the Wild, with the two games featuring a stark difference in appearance. In the former, Rito are much more humanoid and possess fewer avian features, whereas in Breath of the Wild, the Rito are more akin to anthropomorphic birds with almost no human traits. In The Wind Waker, the Rito are the evolved form of the Zoras.[5][6]

The Rito reside in the volcanic Dragon Roost Island in The Wind Waker. There they tend to the Sky Spirit Valoo, who sits atop the peak of the island volcano. Rito in The Wind Waker appear as humanoids with pointed ears, wide red eyes, orangish-yellowish beaks in place of noses, and talon legs. Many members have dark skin and white hair that is often braided; the exception to this being Medli, a female Rito who has light skin and red hair. Whether or not this is a difference of sex in the race is unknown. Rito are initially wingless; when they come of age, they must travel to Valoo and receive a scale that will enable them to grow their wings.[7] Most Rito have their wings folded around their arms as "sleeves", the exception being Medli and the Rito Chieftain. When they take flight, their arms spontaneously transform into open wings. Their ability to fly makes them well suited as mail carriers across the Great Sea. The Rito were not always creatures of the sky, and the Grappling Hook is a remnant of those days.[8][9]

The Rito have adopted a much more bird-like appearance in Breath of the Wild. They have almost no humanoid traits whatsoever. In addition, their children have wings even at a young age and there is no sign of a guardian deity to fill a similar role to Valoo's in The Wind Waker. Both Rito and Zoras co-exist in Breath of the Wild; whether or not this means the Rito are still evolved from Zoras is unknown. These Rito live at Rito Village above Lake Totori. Their males are urged from birth to emulate Revali, the Rito Champion from a century prior.[10] While Rito can fly forward, they cannot ascend on their own and rely on the wind to lift them upwards.[11] The art of creating an updraft to soar high into the sky, which Revali could do, is considered to be a masterpiece of aerial techniques even among the Rito.[12] 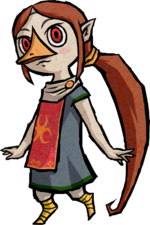 Medli from The Wind Waker, a notable Rito

The Zoras evolved over the span of a century into the Rito after the events of the Great Flood because of the unnatural water created by the gods.[13][14] They live in Dragon Roost Island, specifically within the Rito Aerie, a small cavern to the side of the island mountain. Due to their wings enabling them to fly over the Great Sea with ease, they mainly work as post carriers, and as such their Aerie is mainly used as a Post Office. Their location is significantly important to their way of life; it is where Valoo the Sky Spirit roosts atop the Dragon Roost Cavern peak. When a Rito reaches adulthood, they must receive their wings by traveling to Valoo to receive a scale. A Rito is appointed among the tribe to serve as Valoo's attendant. As Valoo can only speak in ancient Hylian, his attendant is tasked with translating his words.[15][16] Performing music for Valoo is also an expected duty of the attendant.[17] The tribe is led by the Rito Chieftain.[18]

Golden Feathers are very popular among Rito women.[19] Before taking flight, the Rito customarily go to visit the Wind God's Shrine at the base of the island.[20] The Rito also sponsor the Bird-Man Contest on the Flight Control Platform every year.[21]

The first Rito Link encounters is Quill, a postman who visits Outset Island around the time when the Helmaroc King abducted Aryll after mistaking her for Tetra. It is by Quill's urging, pointing out that Aryll would have never been taken had it not been for Tetra and her Pirate Crew's arrival, that convinces Tetra to ferry Link to the Forsaken Fortress where his sister is imprisoned. Link's failure to rescue her, and subsequent meeting with the King of Red Lions, eventually brings him to the Rito's home of Dragon Roost Island.

There, Link learns that the Rito are having a crisis. Valoo has become violent and restless, preventing the Rito from receiving his scales needed to grow their wings, and is thus threatening their way of life.[22] Furthermore, the Rito Chieftain is also concerned about his son, Komali, and his lack of confidence in light of the situation.[23] Valoo's previous attendant and Komali's grandmother had recently passed away, dashing Komali's confidence and turning him into a recluse.[24] The young Prince now spends his days cooped up in his room with Din's Pearl, a treasure of the Rito that his grandmother gave him.[25][26]

While trying to encourage Prince Komali, Link is asked by Medli, the newly appointed attendant and former apprentice of Komali's grandmother,[27] to meet her outside at the Dragon Roost Pond. There she asks Link for help in reaching the entrance to Dragon Roost Cavern, which she cannot reach due to the wind's direction. Link helps her and Medli goes on ahead to help Valoo, and Link decides to follow. He later finds her captured by a Moblin and rescues her. Medli then informs him that she has discovered that something within the Cavern is harassing Valoo. Link discovers that the cause of Valoo's distress is in fact a Gohma. Link quells the dragon's discomfort by defeating the Gohma, finally ending the Rito's plight. Prince Komali also regains his courage, and leaves Link with Din's Pearl.

Later during his quest, Link eventually meets the spirit of Laruto, the deceased Zoran Sage of Earth who was killed by Ganondorf's forces, resulting in the Master Sword losing some of its former power. Laruto beseeches that Link finds her successor, the one who carries the same Harp as she, who is destined to become the next Sage of Earth.[6] Link locates Medli, and after playing the "Earth God's Lyric," awakens her as the Sage of Earth. Together they travel to the Earth Temple where Link defeats the evil there, allowing Medli to pray so the Master Sword can regain some of its power.

The Rito also appear in Breath of the Wild, with their main population center at Rito Village in Tabantha Frontier. It is unknown if these Rito are descendants of the Zora as they are in The Wind Waker.

The name Rito is likely a play on the Japanese word "tori", which means "bird" ("Rito" is a reversal of the characters "to" and "ri"). It may also be derived from Ruto, the Zora princess from Ocarina of Time, referring to the Rito's ancestry.

In The Wind Waker, most of the Rito's Japanese names describe their role or behavior, while most of their German names are derived from real-life bird species and genera. With the exception of Medli and the Rito Chieftain, all of the Rito's names in the French localization end with the latter "F."