Please improve it as you see fit. Editing help is available.
This article has been flagged since June 25, 2009.

Ripened Tingle's Balloon Trip of Love is a game for the Nintendo DS.[1] It is the third game starring Tingle and shares its visual style with Freshly-Picked Tingle's Rosy Rupeeland. Rather than money, as in the previous series installment, this game's theme are women. 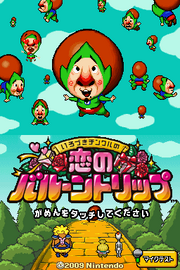 Similar to Tingle's Rosy Rupeeland, the game starts with an ordinary, 35-year-old man. While he watches a sales program on television, the man learns of a book called "Ripened Valiant Heroes Balloon Trip of Love". It is a story about a hero that leaves his parents to save a princess. The book, which normally costs 4800 Rupees, is being offered for only 2 Rupees. He orders the book, but he gets sucked into the world of a picture book when he opens it and transforms into Tingle. He learns that the only way to get out of the book is to dance with the princess of this world, which is the main goal of the game.

Tingle gets to know three new helpful friends in the world inspired by characters from The Wizard of Oz: Kakashi the scarecrow, Buriki the tin woman, and Lion the lion. The cheerful Kakashi is small and therefore he is able to get into small spaces, while Buriki is very intelligent and the cowardly Lion is notable for his strength. Tingle has to wisely use the abilities of his friends in order to solve the puzzles.

A central gameplay element is the romantic communication with female characters. To complete the game, Tingle has to have some form of relationship with each of the five available girls. To raise the girl's affections, he must enter the "Love Push" mode, and attempt to raise their "love meters". He does this by giving them gifts, where each gift has a different effect on each girl. Most gifts are purchased from Loveya for a certain amount Rupees, but there are some items which may be found laying around in various places.

Like Tingle's Rosy Rupeeland, the game makes use of the stylus, such as for using items, speaking with people, and navigating menus.[2][3][4] However, this game is almost entirely a point-and-click adventure, and the control pad is not used at all, except for in a certain Dungeon Mini-Game, where a control pad may be purchased for 1,000 Rupees.

Within Tingle's Balloon Trip of Love's first week on the shelf, it sold over 33,489 units,[5] which was quite an accomplishment for a series without a large fanbase or a long history. Overall, the game came in the ninth position for top-selling games in Japan.[5]