Retrieval of the Ocarina of Time

The Retrieval of the Ocarina of Time is an event taking place at the start of Majora's Mask. It is, given the conditions under which it occurs, the only moment in the entire game (and one of the few in the franchise) where Link is unable to save his progress in the quest. The goal is to do so for the first time.

Skull Kid takes Link's Ocarina and starts practicing with it, while the young hero prepares an attempt to get it back.

When the Skull Kid follows Link in the Lost Woods and his two companion fairies (Tatl and Tael) leave him unconscious by scaring Epona and making him fall from her, he seizes the Ocarina of Time and starts playing it, while the fairies start arguing. When Link wakes up and tries to get his sacred instrument back, the Skull Kid instantly jumps towards Epona and flees far from the scene with her and the fairies. As Link chases them across the forest, he enters a cave and falls into a hole that transports him to Termina. The Skull Kid proceeds to transform him into a Deku Scrub (thus into Deku Link) and flees forward with Tael.

Tatl reluctantly agrees to guide Link towards the underground cavern and teaches him to use Deku Flowers to cross large chasms.[1] Upon reaching the Portal of Clock Tower, he is greeted by the Happy Mask Salesman, who also was a victim of the Skull Kid (in his case losing the titular Majora's Mask). The Salesman tells Link that, if he manages to retrieve the Ocarina of Time, he will be able to return to his Hylian self; in exchange, Link must bring back Majora's Mask as well.

Search for the Instrument

When Link exits into South Clock Town, Tatl complains about the difficulty of the quest,[2] and suggests that the young hero go to the local Great Fairy Fountain to receive help from the Great Fairy of Magic.[3] Heading to North Clock Town, Link finds and enters the Fountain, only to find the Great Fairy shattered into many Stray Fairies,[4][5] who beg him to find the one stray fairy that will complete the regeneration of the Fairy. The stray fairy is found in the Laundry Pool during the day, or in East Clock Town at night. After Link finds the Stray Fairy and brings it back to the Fountain, he returns the Great Fairy to her former state and is rewarded with Magic Power,[6] making him able to shoot bubbles while in Deku form. Although the Fairy is unable to lift Link's curse, she tells him that the astronomer from the Astral Observatory might help him further.[7] 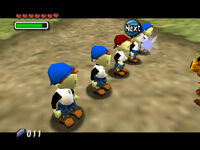 The start of the Hide and Seek game.

The entrance to the path leading to the observatory is in East Clock Town, but its access is limited to the members of the Bombers Secret Society of Justice;[8] in order to find out how to get the necessary code to enter, Link sees the leader (Jim) back in North Clock Town, and explodes his balloon with a bubble to hook his attention.[9] Jim proposes the young hero a challenge: If he manages to find the five main members of the group in a Hide and Seek minigame that takes place in most of the city, he will learn the code to enter their hideout (which leads to the observatory), but he needs to complete the task before the current day ends.[10] Upon exploring the town, he is able to find and catch each of the members. Although he is told to not be able to be a member of the Society, due to an incident they had with the Skull Kid when he was one of them,[11][12] he still learns the code.[13] With it, he gets access to the aforementioned hideout.

Link explores the hideout without too much difficulty and, after beating a few obstacles, he reaches to the observatory and talks to Professor Shikashi,[14] who invites him to see through the telescope. As the young hero does so, he witnesses the Skull Kid at the top of Clock Tower, and watches a mineral falling from the sky.[15] He exits the observatory from the back door and gets the item. Back in South Clock Town, he finds a Deku Scrub who returns to his Deku Flower (fearing that someone might invade it).[16] By trading the Moon's Tear, Link manages to purchase the Town Title Deed, which makes him proprietor of the Deku Flower.[17] This allows him to fly towards the entrance to the Clock Tower and take a Piece of Heart.

Princess Zelda taught Link the Song of Time before the two parted ways.

However, the entrance will only open at midnight on the eve of the Carnival of Time (Final Day).[18] In the key moment, Link and Tatl reach to the top of the tower and confront the Skull Kid, who holds the Ocarina in his left hand. After forcing the moon to descend faster towards the land, the Skull Kid is attacked by one of Link's bubbles and accidentally drops the Ocarina. When the young hero finally retrieves the sacred instrument, he remembers the moment when Princess Zelda gave it to him and played the Song of Time,[19] then told him that this song would aid him in a case of emergency.[20] Indeed, Link plays the melody (but with his Ocarina being turned into the Deku Pipes due to his current form) and manages to travel through time, back to the First Day.[21]

With the Ocarina of Time back in his hands, Link learns the Song of Healing from the Happy Mask Salesman, and with the power of said song he returns to his Hylian form. The salesman, however, express concern in regards of Majora's Mask, as Link was unable to get it back, but the young hero accepts to find a way to do so.

The aforementioned events, when replicated by Link's Hylian form, grant the availability of several sidequests, including: