Rat Holes are small openings in walls that serve as homes to Rats in several games of The Legend of Zelda series.

In The Wind Waker, rat holes appear in dungeons such as Dragon Roost Cavern. If Link tosses some All-Purpose Bait in front of a rat hole, a Rat will come out and offer to sell him something.[1] Potions and All-Purpose Bait are the wares most frequently sold by these Rats. Doing this will also prevent Rats from appearing in the room, whether Link buys something from the Rat or not.

Not every location with Rats feature rat holes, as seen within the Submarines floating around the Great Sea. 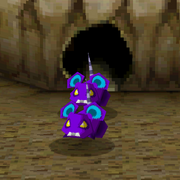 In Four Swords Adventures, rat holes appear in the Temple of Ice and Tower of Winds. Real Bombchu will keep coming out unless the Links solve a specific puzzle in the room where the rat hole is.

In Phantom Hourglass, only four rat holes appear. In these, a Rat holding a small Key will emerge from one hole and run to the other. In order to get the Key from the first Rat (located in the Mountain Passage on Mercay Island), Link must push a block in front of one hole. Then, once the Rat runs to it, Link must corner it. In order to get the Key from the second rat (located in the Temple of Fire on the Isle of Ember), Link needs to kdefeat it with the Boomerang while it is running from one hole to the other.

Similar holes also appear, which serve as doorways only accessible by Bombchu and Gongoron.

In Spirit Tracks, rat holes are occasionally seen in the Tower of Spirits. If a Rat comes out of its hole and is seen by Phantom Zelda, she will cower in fear until Link defeats them. Rats will keep coming out unless Link pushes a block in front of their hole, thus preventing any more from emerging.