Prima Games was a publisher of officially licensed strategy guides established in 1990.[1] It was selected by Nintendo to provide the official strategy guides for their games, including The Legend of Zelda series (as of Phantom Hourglass), after Nintendo Power ceased publication in 2012. In 2013, they joined forces with BradyGames, another publisher which also released several The Legend of Zelda strategy guides.[2] In Spring 2019, Prima Games was discontinued following a "decline in the video game guide sector".[3]

The Legend of Zelda Official Guides

In addition to their standard Premiere Edition guides and eGuides, Prima released Collector's Editions for all The Legend of Zelda games starting with Twilight Princess. These guides feature hardcovers, gilded pages, and bonus items such as maps, bookmarks, and lithographs.[4]

On November 26, 2013, Prima released a limited edition box set celebrating the legacy of the series. It included six Collector's Edition guides spanning all The Legend of Zelda releases from Twilight Princess to The Wind Waker HD, along with a Treasure Chest bookholder, a gilded two-sided bookmark, and a certificate of authenticity signed by Eiji Aonuma.[5] This was the only time Prima released an Ocarina of Time 3D Collector's Edition guide as an exclusive this box set.[6] It also included a revised and expanded Skyward Sword guide with over 100 pages of new content,[7] and an updated version of the Twilight Princess guide. The box set was limited to 50,000 copies.[8] 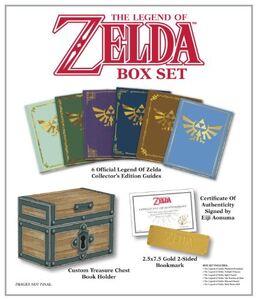 The Legend of Zelda Box Set