The Pond of Happiness,[1] also known as the Wishing Well,[name reference missing] is a Fairy Fountain in A Link to the Past. 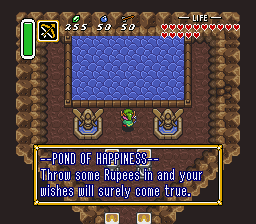 The Pond of Happiness

The Mysterious Pond is located inside a cave on an island in the middle of Lake Hylia, which is home to none other than the Queen of Fairies, Venus. Once inside, Link finds a long hallway leading up to a small pond with two Fairy statues on each side. The pond, known as the Pond of Happiness, asks Link how many Rupees he would like to throw in, which would then tell him whether he would have "good" or "bad" luck.[1] If Link continues to visit and leave behind Rupees until the young hero deposits 100 Rupees in the pond, the Queen of Fairies appears and grants the young hero the ability to either carry five more bombs or arrows. Link can return again and again, depositing another 100 Rupees to continue to increase his carrying ability by various increments. with the maximum being 50 and 70, respectively. The last upgrade for each item will be an increase of ten.[2][3]

At first, Link can only throw in 5 or 20 Rupees at a time. After he meets Venus, the amounts increase to 25 and 50 Rupees. The Queen of Fairies will return Link's Rupees after he has reached the maximum carrying capability for both the bombs and arrows (50 and 70, respectively), redirecting him instead to a friend of hers at the Waterfall of Wishing that will grant him even more happiness.[4]

Inside the fountain, Link can also destroy a wall on the right side of the room using a Bomb to reach a small room containing four Fairys that he can use to restore his health or place in Bottles.

Outside of the cave on the island, Link will encounter two Buzz Blobs and a heavy stone that Link can only lift using the Titan's Mitt. Underneath the stone is a Magical Warp Tile leading to the Ice Island. This is the only way to reach the entrance to Level 5.

A relatively unknown feature is that the random "luck" descriptions given by the fountain actually affect a hidden Luck statistic in the game. There are four possible outcomes when the game determines Link's luck: Big Trouble, A Little Luck, Good Luck, and Great Luck. Great Luck means the next ten enemies slain by Link will be guaranteed to drop various items. Big Trouble means that the next ten enemies defeated will not drop any items (not even if a drop is normally guaranteed, such as Bombs from Zoras). The other two outcomes have no apparent effect on item drop rates. Special item drops such as Keys and items stolen by Pikit are unaffected by Link's luck.