In most The Legend of Zelda games, Link is the only one who makes a major effort to defeat evil, through exploration of dungeons and victory against enemies and bosses; also, without his intervention in sidequests, most of the non-playable characters never see their troubles solved, assuming they're not in danger of dying. And when there are allies that do help the young hero, they generally perform their correspondent actions, without needing the help of Link, and thus not being controlled by the player. In some games, however, this is not the case; there are allies that not only help Link through his quest, they can be temporarily controlled by the player, generally through an ability from the protagonist to guide them.

When this happens, the control scheme is similar to that to play as Link, albeit obviously more restricted since they don't have in common the same skills or the same tools, and thus what they can do doesn't go beyond what the games' situations or conditions demand to them. And in most cases, controlling these characters are one-time features, so it's ensured that there is nothing optional in the games that can only be obtained by them. Over the course of years, fans have suggested this feature to be available for Princess Zelda, though it wasn't until Spirit Tracks when this idea finally came into fruition (as far as canonical games go, of course).

In Majora's Mask, there is only one character other than Link and his alternate forms that can be controlled, and only during a sidequest. This character is Kafei. As Link helps him and Anju to reunite each other, there is a moment when a mask must be retrieved in Ikana Canyon, specifically inside Sakon's Hideout; this mask is the Sun Mask, and the only way to take it back is through a team work. Indeed, Link explores a passage full of enemies while Kafei explores one parallel to the other and solves block puzzles. The player must alternate between controlling Link and controlling Kafei so that the objective can be completed. Kafei cannot use any items since he doesn't have them in the first place, and because he doesn't need to attack enemies, he just can't anyway.

In The Wind Waker, the concept of controlling secondary characters is developed further, especially with the introduction of the Command Melody, which is based on mental control. The ability's first volunteers are the Servants of the Tower that rest in the Tower of the Gods. Although Link can bring the first statue from its resting spot to the central rooms of the dungeon's second floor (a necessity to reveal the whereabouts of the boss, Gohdan) without having to control it, the other statues cannot be brought the same way, since certain obstacles impede both them and the carrier to travel together; this is the moment when the aforementioned Command Melody plays its role, allowing Link to take control of the statues and guide them across the obstacles until reaching their destination. They have no attack-based moves.

After Link beats Forsaken Fortress and rescues his sister, he needs to escort the new generation of sages towards the Earth and Wind Temples. The new sages are Medli and Makar; the former is a Rito who can temporarily fly and, additionally, use her harp to reflect light; the latter not only can fly as well, but also can plant seeds for trees to grow. The temples' respective puzzles earnestly demand the mutual manifestation of these skills with Link's by taking control of them with the Command Melody; for example, in the Earth Temple, there is a huge room where Link must control Medli to give light to the side of a face-like statue with her harp, while Link does the same to the other side with his Mirror Shield, and this itself is only possible after they work together to remove light-sensitive boulders so that certain mirrors can be moved to key positions and participate in the illumination. Another example is the Wind Temple, where Link must use Makar to plant seeds so that some trees can appear and Link can hop on chasms with the Hookshot, which is important to progress further in the dungeon.

The following aspects apply for both Medli and Makar:

By using the Tingle Tuner, Link can summon Tingle, who must be controlled by a second player via a connected Game Boy Advance to the GameCube. Various actions can be done, such as detecting and unveiling special statues in dungeons, having said dungeons' layout already available (regardless of whether or not the Dungeon Map has been collected already), purchase special items, etc.

Finally, Link can control seagulls, albeit with a different method. When he holds a Hyoi Pear on the top of his head, any nearby seagull will eat it and become automatically controlled by the young hero; this comes in handy when there are switches that are extremely far from Link's reach, and not even his trusty arrows are enough to activate them. When controlled, the seagulls are pursued by Kargaroc enemies for some reason, and Link must protect his possessed hosts by flying away from them. A little used strategy is to first attract the hostile birds towards Link so that he can vanquish them, then use another pear to regain control from the seagull.

In the Zelda games based on the Four Sword legend, such as Four Swords Adventures and The Minish Cap, there is an interesting variation of the concept: Link splits into four separate versions of himself. In both the former and the Game Boy Advance version, each version of Link can be controlled by a different player, and while they can compete on multiplayer mode, they must work together to solve puzzles, beat enemies and find success on their quest.

In Twilight Princess, there are a few creatures Link can either control or give commands to. The first of them is the Cucco. In most Zelda games, hitting one too many times will attract many other Cuccos, who will attack Link in revenge until he either dies or leaves the area in particular; in this game, what actually happens is that the Cucco is controlled by Link for a brief time; however, there is no reported use for this strange feature, which hasn't been seen again in any other title to date. Also playable is a Kargarok who takes Wolf Link with it as long as Midna has it under her domain; this creature can be called in Lake Hylia for a mandatory travel during the influence of the Twilight, then for a mandatory light tear hunt during the same period, and finally for an optional minigame when Lanayru Province is purged from darkness.

A partial variation to the concept is seen with the sacred statues controllable via the Dominion Rod; when Link launches the rod's beam to a statue, it moves exactly as Link does. This doesn't count completely as an example since the player is still technically controlling Link during the process (it's more similar to when he moves on par with certain creatures found in some rooms from the Palace of Darkness in A Link to the Past).

In Phantom Hourglass, there is a young member of the Goron tribe named Gongoron, and helps Link explore the Goron Temple; in this dungeon, both characters are controlled by the player so that various puzzles and obstacles can be conquered. This cooperation is vital as it's the only way the temple's boss, Dongorongo, can be defeated. Being a Goron, Gongoron is able to roll and ground pound. Later in the game, Gongoron is playable once again in Dee Ess Island during the Goron Game attraction.

In the game, the player has to not only control Link during the journey, but Zelda as well, as long as she possesses a Phantom (which can only be found in the Tower of Spirits). The reason for this is because, in the game, she loses her body in an encounter with Byrne and Cole, so when Link stuns a Phantom, her soul possesses the enemy's body, and becomes a playable character. Controlled by the Stylus, the possessed Phantom can help Link defeat enemies, as well as cross hazardous areas, and her abilities will depend on the type of Phantom she is controlling. When possessing a Warp Phantom, for example, the princess can warp from a part of the current floor to the other with the help of a Phantom Eye. As a Torch Phantom, she can use her flaming sword to guide Link through very dark areas and light up torches. As a Wrecker Phantom, she can curl (much like Goron Link in Majora's Mask) to break obstacles, destroy enemies instantly and even stun other Phantoms. In all forms except the last one, the Princess can also carry objects like bombs and Arrow Orbs.

During the start of the game, Princess Zelda is controlled alive, making this the first time she is actually played as. In this case, both characters have to be guided through Hyrule Castle during a stealth mission. In a similar fashion, when Link is fighting Malladus, he has to distract him so that the princess can shoot a Light Arrow to his back (which can be done when the player touches the Bow of Light icon at the bottom center of the touch screen).

In Skyward Sword, Groose helps Link confront and defeat The Imprisoned in two of the fights that take place in the Sealed Grounds. After he fails to do anything to help the young hero and Zelda through the adventure, let alone during the first battle with the aforementioned sealed form of Demise, he starts building a catapult-operated weapon called the Groosenator. When The Imprisoned is freed again, he proceeds to load a bomb on the weapon, then operate it sideways to throw the projectile from a distance towards the monster, stunning it so Link can climb it and attack its weak point. When the loading step is complete, the player presses Up in the Wiimote's Pad to switch control between Link and Groose. For the next shot, there must be a wait until Groose loads the next bomb. 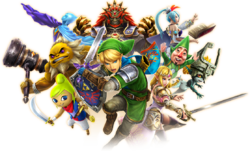 In both Hyrule Warriors and Hyrule Warriors Legends, players have access to multiple playable characters aside from just Link, as the games' story is one that is experienced from multiple points of view. Characters such as Princess Zelda, Impa, Darunia, Agitha, and Fi are finally given roles outside of just being the ones who aid Link from the sidelines, but by his side in battle. Even villains, such as Ganondorf, Zant, and Ghirahim are given the chance to be under the players' control. The introduction of new characters, such as Lana, Cia, Volga, and Wizzro, are also playable as well.