The Ordona Province is a province adjacent to the Kingdom of Hyrule in Twilight Princess.[1] It is located at the southern end of the Hyrule map and is by far the smallest province in the game.

Ordona is not considered a part of Hyrule proper by some,[2][3] although it is never specifically made clear if Ordona is part of Hyrule or not. Moreover, Coro refers to Link as an "Ordonian".[4] 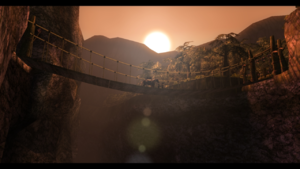 The bridge connecting Ordona to Faron

The Ordona Province consists of Ordon Village, Ordon Ranch, and the Ordon Woods. It is connected by a bridge to the Faron Woods of the Faron Province, located just north of the Ordon Woods. The province is watched over and protected by the Spirit of Light Ordona. As a neighboring province to Faron, it is a primarily forested region. Its sole village relies mainly on ranching and agriculture, especially goats and pumpkins.[5][6]

Link, a resident of Ordon Village, is tasked with delivering a sword to the Royal Family of Hyrule.[3] However, while trying to retrieve his horse Epona from Ilia to make the trip, he is knocked unconscious by King Bulblin and his Bulblin minions when they invade the Spirit Spring, all the while Ilia and the rest of the Ordon children — Malo, Talo and Beth — are kidnapped. Link pursues after them to the entrance of the Faron Province, only to find it now covered in Twilight, where he gets pulled in by a Shadow Beast and transformed into a wolf by the power of the Triforce of Courage. He is then imprisoned at Hyrule Castle and escapes with the aid of Midna.

After escaping his imprisonment from Hyrule Castle, Link returns to the Ordona Province still as a wolf. There he saves the Light Spirit Ordona from having its light stolen by a Shadow Beast,[7] thus saving the Ordona Province from also falling to Twilight. Ordona informs him that already Hyrule's other provinces had fallen to Twilight and the light stolen from their Light Spirits. The Light Spirit instructs Link to revive the other Light Spirits to put an end to Zant's, the king of Twilight, conquest and spread of Twilight, thus beginning Link's quest.

During the ending credits, Link departs from the province, along with Epona, to go on another journey.

The name "Ordona" is only used in the English versions of Twilight Princess; every other region uses variations of the Japanese name, ラトアーヌ (Ratoānu), also transliterated as "Latoan." The name "Latoan" can also be found written on the map in Hylian.