Once Upon a Time Machine

"Once Upon a Time Machine" is the twentieth episode of Captain N: The Game Master. It was first broadcast in the United States on November 17, 1990. 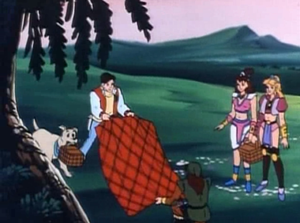 The heroes get ready to have a picnic

Kevin, Duke, Princess Lana, Link, and Princess Zelda are getting ready for a picnic in Hyrule.[1] However, their plans are interrupted when a swarm of Boons begin to attack them.[2] As the heroes are defeating all of the Boons, Count Gruemon and Doctor Gary are preparing to steal Kevin's Power Pad. When Kevin watches how Link defeats a Boon without a sword by just kicking it, he tries to copy him by taking off his belt with the Power Pad and Zapper and then kick the Boon, but he ends up tripping and not even kicking the bug.[3] Kevin then turns around and sees that Count Gruemon has already taken his Power Pad and Zapper, who quickly runs to the inside of his time ship with Doctor Gary and flies off into a large warp hole. Kevin decides to go after them, and Link offers his help as the two heroes jump into the hole.[4] They find themselves in an old west-like town, and after Kevin almost gets beaten up by a bull,[5] he is saved by a cat named Pero. It is eventually revealed that Pero was sent back in time by Count Gruemon for saving a mouse from one of Gruemon's cats, and is still being persecuted for his crime.[6] Pero then joins Kevin and Link on their quest since he has the Time Map that shows the warps to the different times in his video world that could help him get back to his own time.[7]

For most of the episode, Link, Kevin, and Pero travel through different eras of Pero's video game world as they are being persecuted by Count Gruemon and his two henchmen.[8] Eventually the heroes reach the city of London, where they get on an airplane to help Pero reach another time warp to New York: the location of the time warp to his home.[9] They land on the Statue of Libery's torch, which also happens to have Count Gruemon's time ship on the statue's crown.[10] Link, Kevin and Pero confront Count Gruemon and quickly head to his time ship, but Doctor Gary calls a gigantic sea snake from the water depths.[11] As Pero is trying to make his way to the time warp on the statue's torch, the giant sea snake appears. Link begins to zap it with his sword to distract it meanwhile.[12] However, before Pero can reach the time warp, Doctor Gary destroys it.[13] Pero quickly climbs down, pushes Link out of the way, and runs to the inside of Count Gruemon's time ship to begin to take off, which is where Kevin's Power Pad and Zapper were located.[14] Kevin, angered that Pero was just looking out for himself, tries to fight off the sea snake by himself.[15] Pero then has a change of heart and throws Kevin his Power Pad and Zapper, allowing the young boy to defeat the sea snake.[16] Link, after witnessing Pero fly away, complains that he forgot to tell them how to get back to Hyrule, but just then, a part of Pero's Time Map falls down on Kevin's hands.[17]

In Hyrule, Zelda and Lana had already called the rest of the N Team to go look for Link and Kevin.[18] As Simon Belmont is looking for traces of the two heroes, he bumps into a Moblin. He is saved by Kevin, who defeats the creature without his Zapper since he does not want to solely depend on it.[19]