The North Castle, or North Palace, is a location in The Adventure of Link. It has also appeared in other non-canonical media such as the Valiant Comics, The Legend of Zelda TV series, and The Shadow Prince.

The North Castle is the resting place of the slumbering princess, Zelda. As Link goes out on his adventure to place the Crystals that will open the entrance to the Great Palace in their proper places, he can return to the North Castle at any time. In the case that Link ends up getting a Game Over, he will have to start over in North Castle. 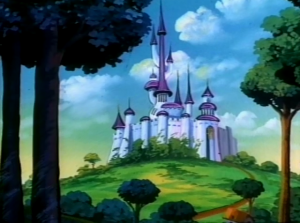 The North Castle in the animated series

The North Castle is also considered to be a key place in The Legend of Zelda TV series. Most of the episode's title cards portray a view of the castle, since it is the usual location where the episodes start off. Link, Zelda, Spryte and King Harkinian reside there full time, and the castle is portrayed to be much larger than in the games and the Valiant Comic series. The castle also seems to host various events such as the Magician's Contest, which take place in the castle's enormous courtyard.

Just like Hyrule Castle, the North Castle is prone to coming under attack by Ganon or his minions since the Triforce of Wisdom is kept away in one of the castle's towers. Due to this, Ganon is known to go to extreme measures to try and obtain the Triforce, such as in "That Sinking Feeling", where Ganon pulls the castle into the Underworld in hopes of easily retrieving the sacred relic. North Castle also seems to have a rather weak security since most of the time, Ganon and his minions seem to easily enter the castle's inner walls without getting noticed by the guards. 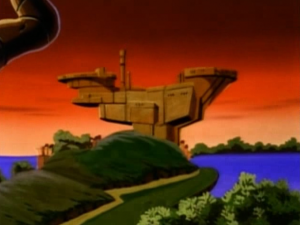 In Captain N: The Game Master, North Castle serves as the home of both Princess Zelda and Link, and it is also where the three pieces of the Triforce are located. The North Castle is portrayed with a more futuristic look than its other depictions, straying from its medieval-times appearance. Very few areas of the castle are explored in this cartoon series, as only Princess Zelda's throne is briefly seen in "Quest for the Potion of Power" when Zelda and Link meet Kevin, and the other location shown is the chamber where the Triforce is kept.

Like in previous incarnations, the North Castle is guarded by some rather inept Soldiers, allowing King Hippo, Eggplant Wizard of Mother Brain to infiltrate the castle without too much trouble and going as far as stealing the Triforce, as seen in "Having a Ball".

In The Shadow Prince, North Castle is first visited after Princess Zelda invites Charles of Moria to meet the King of Hyrule.[1] Although much of Link's adventure takes place outside the castle, a great part of the story develops here. It is in a secret chamber known as the Triforce Room where the Triforce of Wisdom is safely kept away from the hands of Ganon.[2] Princess Zelda, the king, and Impa all dwell in the castle.

The Tower, which is situated in the most remote part of North Castle, is the location in which the castle's prisoners are kept. In the case that Link accuses Charles of being evil without having proof to back it up, he will be sent here as punishment, and the only means of escape will be to use the Golden Whistle or the Clock given to the young hero by Impa.[5][6]

Once Link manages to defeat Ganon, he returns to the North Castle with the Triforce of Wisdom in hand, where the king thanks him for having saved Hyrule once again and thus decides to celebrate his victory against Ganon. 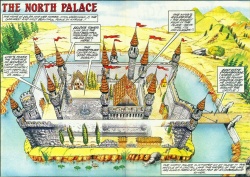 The North Castle is a main location in the The Legend of Zelda comics by Valiant Comics. It is situated on an island in the middle of a lake,[7] and the walls of the castle are surrounded by a protective magic that prevent evil from gaining entrance to it.[8] Link and Princess Zelda live here while they fight against Ganon's evil forces during the events that take place after The Legend of Zelda and The Adventure of Link. It is portrayed as the home of Princess Zelda and her father, King Harkinian, and later Link himself, after the events of the first two games. The people of Hyrule come to engage in economic activity in the marketplace that is located in the courtyard of the castle.

There are also several towers and buildings within the main structure, primarily a tower each for both Link, where the Triforce of Wisdom is kept,[9] and Zelda and a residence for King Harkinian,[10] which is the largest room in the entire castle.[11] To keep intruders from entering, the palace has several watchmen to ensure that the main gates are only opened to those who have permission.[12]