The Sand Rod,(ALBW)[1] known as the Sand Wand,(ST)[1] is a recurring item in The Legend of Zelda series. It allows the wielder to construct walls of Sand to act as barriers.

In Spirit Tracks, the Sand Wand is obtained after beating three Stalfos Warriors in the Sand Temple. It can raise walls wherever the green orb of the Sand Wand touches, which is controlled by the Stylus.[2] Each cube-shaped segment of the sand walls will stay intact for four seconds. Link can use it below his feet to raise himself to higher ground, as well as to roll boulders, flip puzzle blocks, trap certain enemies, find items hidden beneath sand, and allow Phantom Zelda to move across sand where she would normally sink. The Sand Wand's utility is also quicksand-proof, allowing the young hero to avoid sinking in deep-rooted sand. The Sand Wand is also extensively used to solve various block puzzles in the Ends of the Earth Station located in the Fire Realm.

In contrast with its incarnation from Spirit Tracks, the Sand Rod can only allow Link to make solid walls of sand rise in a straight line front of him. Additionally, Link cannot create sand beneath him. Consequently, the Sand Rod is useless on any other type of terrain, but invaluable on patches of sand. It is useful for creating passageways for Link to cross, both by walking on top of them and by merging with their sides; unearthing sand-dwelling enemies and stunning them; revealing buried Treasure Chests and hidden Maiamais; and elevating enemies. It is notably mandatory for both reaching and subsequently traversing the Desert Palace.

The Sand Rod can be obtained as soon as the Thieves' Hideout is cleared. The Rod was originally rented from Ravio by Osfala,[3] who intended to use it to traverse the Eastern Palace.[4] The Rod remained with him after he was turned into a painting by Yuga, until Link saved Osfala after traversing the Thieves' Hideout. Osfala returns the Sand Rod to Link, asking him to bring it back to Ravio's Shop.[5][6] From this point on, the young hero can rent it for 50 Rupees or buy the Sand Rod himself for 800 Rupees. 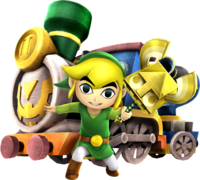 Against an elite enemy, Toon Link strikes the foe by summoning a sand block from the ground beneath them, sending them into the air. He then summons another sand block over their head and slams them down to the ground. Against Giant Bosses, Toon Link raises a large sand block beneath them as an uppercut. He then jumps onto the Spirit Train as it falls from the sky and crashes into the monster's weak spot in a fiery blaze.

Toon Link calls the Spirit Train from a portal behind him and sends it crashing into the enemies in front of him.

Upon activation, Toon Link momentarily puts the Sand Wand away and gives his enemies a salute before drawing back the wand, bursting in energy as he does so. When deactivating, Toon Link conducts the Spirit Train with his wand to appear from warp portals and crash into his enemies three times; he jumps onto the Spirit Train as it comes in behind him during the finishing blow and strikes his enemies in a fiery blaze. When his Focus Spirit is depleted, the Spirit Train parks right by Toon Link's side and blows its whistle loudly as its conductor gives a yell, subsequently bursting in fiery energy.