Mythology in The Legend of Zelda Series

For popular fan-produced myths about the series, see Myths of The Legend of Zelda Series. 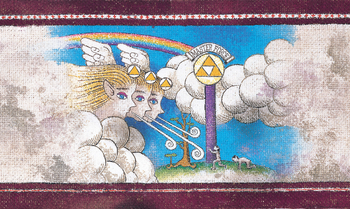 A depiction of the Triforce and the Golden Goddesses.

There have been many mythologies in The Legend of Zelda series.

Before time began, there existed three Golden Goddesses who descended upon chaos to create Hyrule.[1] Din created the land,[2] Nayru blessed it with the law,[3] and Farore filled it with life.[4] When they departed, they left behind at the point where they left the world a fragment of their power in the Sacred Relic known as the Triforce,[5] and the place where it came to rest became known as the Sacred Realm.[6]

The Triforce and the Sacred Realm

The area around the Triforce became the Sacred Realm. The Sacred Realm is an exact parallel to Hyrule. The Temple of Light sits at the center of the realm. Should someone with evil intentions touch the Triforce, it would split and the Hero of Time would appear to defeat him.

The Four Giants are the guardian gods and creators of Termina. They are located in the four cardinal drections of Termina: Woodfall, Snowhead, Great Bay and Ikana Canyon. Always vigilant, the giants told the people to summon them should the they ever need help. However, they are friendly and will play with lesser beings, such as the Skull Kid in Majora's Mask.

Once the evil of Majora's Mask corupted the Skull Kid, he trapped the giants and threatened Termina out of revenge, believing that they hated him. The Hero of Time set out to free the Giants to stop the Skull Kid. Once they were free, the hero summoned the giants and they aided him in saving Termina. After the hero stopped the evil of Majora's Mask, the giants returned to their respective regions to continue watching over Termina.

Legend of the Hero of Time

The Hero of Time defeats the Dark Beast Ganon, restoring peace and happiness to the land of Hyrule with the power of the Blade of Evil's Bane, the Master Sword.

Ancient legends in the land of Hyrule spoke of a legendary Golden Power, the Triforce, that resided in the magical Sacred Realm and had the power to grant the wishes of one who mastered it in its entirety.[7][8] One day long ago, a man of great evil named Ganondorf, of the Gerudo tribe, schemed to enter this magical realm and lay claim to the Triforce in order to become the true master of the world.[9][10] With the unwitting assistance of a young boy named Link (who would grow up to become the Hero of Time) and Hyrule's Princess Zelda, Ganondorf was able to enter the Sacred Realm through much cunning and deceit.[11] However, because his heart was not in balance, the Triforce separated upon being touched by Ganondorf's tainted hands, leaving him with only the Triforce of Power and transforming the Sacred Realm into a corrupt world of evil and despair.[12][13] The Triforce of Wisdom was then bestowed upon Princess Zelda and the Triforce of Courage upon the Hero of Time respectively.[14] The Hero of Time was put into an enchanted slumber for seven years until he matured enough to properly handle the Blade of Evil's Bane, the Master Sword, which he had removed from the Pedestal of Time.[15] Meanwhile, Zelda went into hiding (disguised as a Sheikah warrior known as Sheik) for the seven dark years of Ganondorf's evil reign over the kingdom as the Usurper King of Hyrule, awaiting the time when Link would reappear and they could overthrow Ganondorf together.[16]

Sure enough, Link returned seven years later from the Sacred Realm and came in search of the mythical Seven Sages who were said to have the power to bind Ganondorf and return the light of peace to Hyrule. Through much toil and trouble, the Hero of Time braved the many evils Ganondorf had cast upon the realm and sought out each of the major temples throughout Hyrule and, on the instructions of Rauru the Sage of Light,[17] awakened each of the Seven Sages, who curiously turned out to be figures he himself had befriended in his childhood (Saria the Sage of Forest, Darunia the Sage of Fire, Ruto the Sage of Water, Impa the Sage of Shadow, and Nabooru the Sage of Spirit). After each of the Sages had been awakened, Princess Zelda revealed herself to be the seventh Sage and Leader of the Sages as well as revealing that she and Link both contained the other two pieces of the Triforce Ganondorf had failed to capture.[14] Ganondorf soon captured Zelda however and hoped to use her as bait to lure the Hero of Time to the top of his castle in order to steal the Triforce of Courage back from him.[18]

Link followed to the fiend's castle and, with the assistance of the remaining Sages,[19] entered Ganon's Castle and fought his way to Ganondorf's throne room atop Ganon's Tower. Here the Hero of Time confronted the King of Evil in an epic battle that ended with Ganondorf collapsing to the ground seemingly dead and Zelda released from her prison. Ganondorf then attempted to crush the two in the ruin of the tower however when he began to bring down his own castle around them.[20] The pair escaped in time however, only to see Ganondorf emerge from the rubble and transform into the Dark Beast Ganon. The Hero of Time then fought Ganon in hand to hand combat and defeated him with the might of the Master Sword, allowing the Sages the time they needed to bind him and throw him back into the void of the Evil Realm before sealing the portal between the worlds.[21][22] Ganondorf screamed in rage that as long as the Triforce of Power was in his hand, he would return one day to exterminate the descendants of the Hero of Time and the Sages to make them pay for his imprisonment.[23] Princess Zelda then used her power as a Sage to send the Hero of Time back to his own age in order to regain his lost childhood.[24] Upon his departure, the Triforce of Courage split apart into eight shards and scattered across the land to be found again one day by another Hero that would have need of its power.[25] The Master Sword was also left in the Hero's wake, being returned to its pedestal in turn. With this act, the Hero of Time vanished from this branch of Hyrule's history, leaving only his legend behind.

There is a legend known as the Legend of the Picori which tells of a time when the world was plagued by evil. During this time, the Minish people descended from the sky and bestowed upon the Hero of Men two gifts: the blessed Picori Blade and the Light Force. Wielding these gifts, the hero of men defeated the evil and sealed it in the Bound Chest with the Picori Blade.

In Hylian mythology revealed in Twilight Princess, the Golden Goddesses created the Oocca even before the Hylians. Some say that it was actually the Oocca who created the Hylians and that they are their ancestors.[26][27] According to Shad, the Oocca created the Hylians and their City in the Sky simultaneously.[28] In the days when they maintained contact with the royal family of Hyrule, the Oocca gave the Dominion Rod to the messenger to the heavens to be used only when the royal family needed to communicate with them.[29] The Oocca are also much more advanced than the Hylains, as shown by the complex machinery in their home.