For information about the games' soundtrack, see Recurring Music in The Legend of Zelda Series.

Music is a pivotal element that has played a notable role in The Legend of Zelda franchise. Usually, it is portrayed with magical properties that serve various functions, ranging from solving puzzles to getting access to new zones.

Music as a gateway to sacred places

Zora's Domain will open only to those who know "Zelda's Lullaby"

In several The Legend of Zelda games, there are places that have a seal or protection that can only be lifted with a magical melody. There are many diverse reasons for this: For one, it impedes the forces of evil from gaining access to them, and only those chosen by destiny are allowed to enter after learning the melodies. This is noteworthy in Ocarina of Time, where some of the most prominent races of Hyrule, namely the Gorons and Zoras, will only allow the messenger of the Royal Family to enter their domains, and that messenger announces his or her presence with "Zelda's Lullaby". One of the most treasured objects of the Royal Family is the Ocarina of Time, as only with it and the "Song of Time" is the designated hero capable of accessing to the Sacred Realm and the Master Sword.

Other games in the series follow a similar trend, such as Majora's Mask with the different melodies that serve as the key to gain access to the temples where the Four Giants reside (it's also important to note that each melody has to be played with the proper instruments to have the desired effect. In the particular case of the Elegy of Emptiness, more than one will be necessary).

In Skyward Sword, the primary use of the Goddess's Harp is to open gateways to sacred places. Whenever the hero learns a song, he must play it in a certain spot to gain access to another area. In most cases, it grants him access to the Silent Realm, but it also opens the entrance to Thunderhead. The harp can also activate Gossip Stones and special walls.

Music as a restoring force 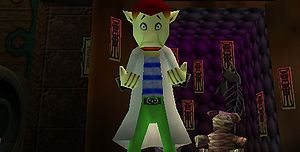 In Majora's Mask, Pamela's Father is healed only after Link plays the "Song of Healing"

Music has also served as a source of blessing, and the influence of certain melodies can recover lost forces. Majora's Mask takes advantage of this concept with the introduction of the "Song of Healing". This song allows the most tormented souls to dissipate all sorrow and regrets, thus allowing them to rest peacefully, and the curse cast upon them is encased physically in the form of Masks that are usable in favor of the wearer for different purposes. However, not all beings residing in Termina can be blessed with this melody, as they have become devoid of emotions or pure heart. With the "Song of Storms", these beings have their curses dispelled, with the added property of providing an instant source of water (which is necessary to make the Music Box House functional once more and perform the "Farewell to Gibdos" to repel the evil roaming through the living world).

Without any musical influence, it is not possible to fight the evil forces. In The Wind Waker, the Master Sword loses its Power to Repel Evil if the Sages destined to guard the Earth and Wind Temples do not pray by playing their sacred instruments. In Spirit Tracks, the Lokomo Duets (where the Spirit Flute plays an important role) are performed to restore most of the Spirit Tracks that not only contribute to seal the Demon King Malladus, but also provide access to the temples that further contribute to restore the aforementioned seal.

Music as a tool to manipulate time and space 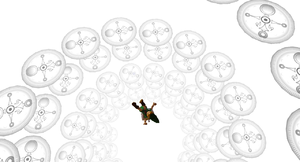 In Majora's Mask, Link can manipulate time by traveling back to the First Day, changing daytime and slowing down its flow by simply using the "Song of Time"

Since the inception of The Legend of Zelda, music has served as a means to warp from one place to another. This is helpful for the different incarnations of Link, who is able to travel more easily through the overworld and reach the Dungeons more quickly this way. This trend continues with almost no variations in A Link to the Past, Ocarina of Time and several other installments.

From Ocarina of Time onwards, it has also been possible to manipulate time itself. In addition to the Song of Time, which gives access to the whereabouts of the Master Sword (thus allowing Link to travel between past and future), the game also shows the "Sun's Song". The property of this melody is to change the current daytime from day to night, and vice versa. Even when the song is played within places where the sun rays cannot reach, this magical function allows the young hero to paralyze nearby ReDeads. In the subsequent two 3D entries, Majora's Mask and The Wind Waker, there are melodies that serve the same function, with the former adding new properties for the "Song of Time" as well; this includes slowing down the flow of time and warping Link back to the First Day through a space-time vortex. At one point after the end of Ocarina of Time, Princess Zelda tells Link that the "Song of Time" is blessed by the Goddess of Time.

Music as a puzzle device

Several dungeons in the series are designed under the magical influence of music. In Ocarina of Time, for example, both "Zelda's Lullaby" and the "Song of Time" are helpful to manipulate devices that open new ways and possibilities. Both the "Song of Storms" and the optional "Scarecrow's Song" are capable of pinpointing secrets that would never be unveiled otherwise, to the point that 100% Completion is inconceivable without them. In this and other games in the series, songs that serve as gateways or restoring means are also subject to serve as puzzle solvers. There are critical situations that can only be solved with a melody (such as "Epona's Song" when Link tries to ride in the corral of horses without having to use a horse other than Epona herself). The Wind Waker introduces the "Command Melody" to help Link control other characters inside temples that earnestly require mutual exploration.

Music has proven to be a valuable guide as well. In Ocarina of Time, "Saria's Song" guides Link through the Lost Woods, and the song itself allows the young hero to communicate with his Kokiri friend. Also, from this game onwards, the background music advices the proximity of an enemy, and in rare circumstances the proximity of a key location.

Main article: Instruments of the Legend of Zelda Series