It has been suggested that the portion of this page concerning Mother-and-Child-Rocks should be made into its own page. Should the target page already exist, this content should be merged into it where appropriate. Discuss this on article's talk page.

The Mother & Child Isles are a large island (the mother) and small island (the child) situated next to each other in the Great Sea in The Wind Waker.[1]

On the Child Island, which can be easily accessed by boat, Link meets a Wandering Merchant. A Blue ChuChu, and Rown, one of the Korok inhabitants of Forest Haven, can also be found here. 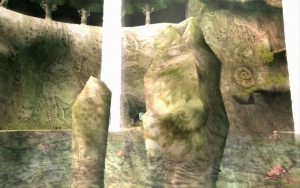 The Mother-and-Child Rocks in Twilight Princess

The Mother-and-Child Rocks[2] are a notable part of Zora's Domain in Twilight Princess. The structures can be found in the central waters near the base of the waterfall, and are the only area where the native Reekfish congregate. In the game, Link must catch a Reekfish in order to obtain the Reekfish Scent and thus find his way to Snowpeak Top.

The Mother-and-Child Rocks are an obvious reference to the Mother & Child Isles found on the Great Sea in The Wind Waker; however, it is unlikely that the two are related, as the rocks are much smaller in size than the islands. Also supporting this is the fact that it has been confirmed that Twilight Princess and The Wind Waker take place at the same period in alternate timelines.