Minister Potho is a character in The Minish Cap.[3]

Minister Potho is the minister to the Hyrule. He is a short man with white hair only on the sides with a bald top, a large white mustache, and large glasses. He functions as the caretaker and tutor of Princess Zelda by order of her father, King Daltus. In his capacity as minister, Potho has great access to the Royal Family of Hyrule and resides with them at Hyrule Castle, serving largely as the king's major-domo.

When the story begins, Princess Zelda sneaks out of Hyrule Castle without Minister Potho's knowledge or consent in order to find her childhood friend,[4] Link, and attend the Picori Festival with him. Upon their return to Hyrule Castle soon after, Minister Potho is shaken to see that Princess Zelda has been outside the Castle without protection, though he brushes it aside and accepts Smith's Sword from Link,[5] crafted by Smith and intended for the winner of the Sword-Fighting Tournament of the Picori Festival. When the winner, Vaati, prepares to open the Bound Chest, Minister Potho is among the many that are knocked aside before Princess Zelda is turned to stone by his Sorcerer's Curse.

When King Daltus decides to send Link on a quest to restore the shattered Picori Blade in order to break Vaati's Curse and save Princess Zelda, Minister Potho gives Link Smith's Sword, which was meant to be given to Vaati as the winner of the Tournament.[6]

When Link returns from Mount Crenel with the Earth and Fire Elements, Minister Potho tells him a story his grandmother told him about the location of the Minish Door.[2]

At some point after King Daltus is impersonated by Vaati, Minister Potho is turned to stone along with the other residents of the Castle while in the Palace Courtyard. After Link restores him with the power of the Four Sword, he tells Link that Vaati has taken Princess Zelda to the roof.[7] He leaves the Palace Courtyard with the other Vassals before Link fights Vaati's Wrath, and does not reappear for the remainder of the game.

He is one of the potential characters to have a random Kinstone Fusion available.[8] 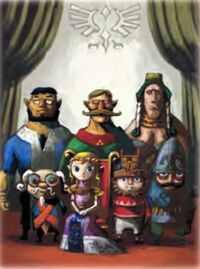 The painting that resembles Tetra's Pirate Crew, with the character resembling Minister Potho and Mako at the bottom left-hand corner

Mayors in The Legend of Zelda series
Retrieved from "https://zelda.gamepedia.com/Minister_Potho?oldid=822652"
Categories:
Hidden category: