Melari is a character in The Minish Cap.[4]

Melari is the elder of the Mountain Minish who live on Mount Crenel and is a highly-revered Minish blacksmith. As the leader of Melari's Mine, a mineral manufacturing plant high up on Mt. Crenel, he helps Link reforge the broken Picori Blade into the White Sword. His close location to the Crenel Mines makes him a wealth of information when it comes to directing Link in the direction of the second of the Four Elements, the Fire Element. After the White Sword has been reforged, he hints to Link that to merge it with its elements, he must visit the Elemental Sanctuary to merge it with its other elements. 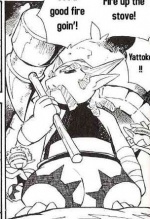 Melari, as he appears in The Minish Cap Manga

In the The Minish Cap manga by Akira Himekawa, Melari has stopped working as a blacksmith due to the death of his wife, a Forest Minish that had died from the stress of intervening in a dispute between the Forest Minish and Mountain Minish. After Link retrieves the Fire Element from Gleerok, Melari agrees to help reforge the Sacred Blade.