Medieval elements in The Legend of Zelda Universe

The Legend of Zelda series is predominantly a medieval inspired fantasy setting as depicted in the many iterations of Hyrule.[1] As with traditional fantasy, the series takes inspirations from medieval mythology and tales by featuring elven creatures, fairies, dragons, wizards, enchanted forests, castles, knights, as well as many other elements. Throughout the centuries and different timelines, the Kingdom of Hyrule often remains in a technological stasis with iconic medieval weapons, structures, and other elements recurring. Concurrently, the varying settings explored in the series occasionally deviate from such elements with technological advancements. These advancements are more apparent in later entries from the 2010s such as Skyward Sword and Breath of the Wild.

Below is a list of items throughout the Zelda games where samples of medieval elements and other fantasy elements (either in Hyrule or in some other land) have been noticed. 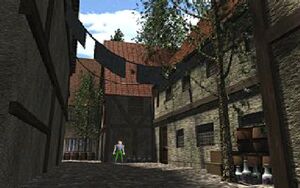 Note the crossed timber frames on the exterior of the house

Much of Hylian architecture is heavily inspired by churches, bridges, castles and villages of medieval Europe.

Hyrule Castle is designed much like the typical medieval castle. Its exterior is composed of many stone bricks. The walls and towers of the castle feature merlons and crenels along the edges. The interior relies on torches for lighting and has paintings, tapestries, suits of armor and royal statues along the wall, while the stone floor is draped in carpets. Surrounding the castle is the courtyard contained within the inner walls. Beyond that lies the Castle Town generally. Snowpeak Ruins, a mansion, shares the same stone structural qualities as Hyrule Castle in both exterior and interior.

The Temple of Time is designed identically to a church of the Middle Ages, made of stone bricks and filled with many structural arches and a few small towers with a steeple. The temple holds religious significance as it is the gateway to the Sacred Realm.[2]

Many of the villages such as Kakariko Village have traditional medieval inspired homes designed with timber frames coating the exterior and tend to be the same color with little to no variation. Kakariko Village in particular has a windmill, which were used in the medieval europe to mill grain or pump water. The villages of Hyrule often have taverns, the Milk Bar and Telma's Bar are prime examples.

Twilight Princess features the Great Hylian Bridge and the Bridge of Eldin. These stone bridges feature merlons, crenels and two turrets at each side much like the design of a castle. The Great Hylian Bridge in Breath of the Wild appears to have more prominent and numerous crenels than its previous iteration. 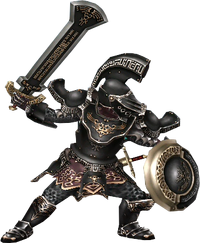 A Darknut, described as knights

Throughout the history of Hyrule, battles were fought for either unification, greed or other reasons.[3][4] These wars relied on medieval weaponry and warfare.[5]

The Soldiers and Knights of Hyrule often wear steel plate armour and chainmail underneath with a variety of helmets (such as loose interpretations of the galea, armet, norman, and barbute). Swords, Shields, Spears, Flails, Bows and Arrows, and Crossbows are common weapons used across Hyrule and other lands. These medieval weapons serve as the primary method for combat alongside Magic in the Legend of Zelda universe. These weapons and armour are not only limited to Hylians. Darknuts are knights in particular, that wear heavy plate armor with armet helmets armed with large sword and shields. Lizalfos, Bulblins and Bokoblins tend to wear leather armor with leather caps instead and are armed with bows, spears, clubs and swords. King Bulblin in particular uses a large battle axe for combat. Notably, Link's shield in The Legend of Zelda had a red cross on it, strikingly similar to the red cross depicted on the shield of Knights during the crusades.

Horseback combat is also prominent in Hyrule as well as other lands, and it serves as a recurring gameplay element. In Twilight Princess, Link jousts against King Bulblin on the Bridge of Eldin. In The Adventure of Link, Rebonacks also joust using lances while riding on floating horse statues. The Gerudo value horseback riding and have a Horseback Archery Range.[6]

Magic based combat encompasses the fantasy aspect of the series. Link uses magical wands such as the Fire Rod and Ice Rod as to attack foes, while foes such as Wizzrobes have offensive magical capabilities as well. 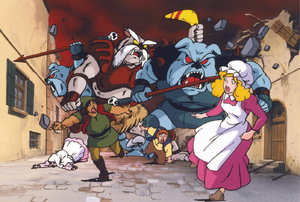 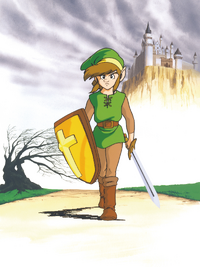 Link standing before a castle, dressed in a tunic, tights, and bears a cross on his shield

The society of Hyrule varies from culture to culture. Hylians wear tunics or dresses with aprons and bonnets, common in style of the medieval era. Many citizens of the various iterations of Hyrule Castle Town and Kakariko Village can be seen dressed in such garb. The Kokiri of the forest wear tunics as well. The protagonist, Link, wears a tunic originating from different backgrounds in each adventure. Sometimes his tunic has chainmail underneath and often he wears tights which were common amongst men in the medieval era.

The villages have windmills, blacksmiths and taverns which serve Hyrule’s citizens much like in medieval Europe. In Minish Cap, Link and his Grandfather work as blacksmiths and create a sword as a prize for the sword-fighting contest at the Picori Festival.[7] In A Link to the Past, the Dwarven Swordsmiths can temper Link’s sword. In A Link Between Worlds, Link works as an apprentice for the Blacksmith and his family, and can have the Master Sword tempered by him.[8]

Land travel is dependent on horses and carriages. In Twilight Princess, Link escorts a carriage.[9] Ilia, Telma, and Prince Ralis ride the carriage to Kakariko Village, while Link fends off the monsters attacking it. In Breath of the Wild several broken carriages can be found in the remnants of Hyrule Kingdom.

Hyrule follows the same social hierarchy as medieval Europe. The Royal Family rules over Hyrule, with the King generally in charge, and if not present then the prince or princess assumes rule. Beneath the Royal Family were nobles and Knights. The Knights of Hyrule were tasked with protecting the Royal Family and more specifically guarding the Royal Jewels in Four Swords Adventures. The Knights of Hyrule are also descended from the legendary hero's spiritual successors[10][11] and Link is usually born from the knightly bloodline like European noble families. At the bottom were the peasants who would make a living off of farm labor, many residents of Ordon Village assumed such duty by harvesting crops and wrangling goats. 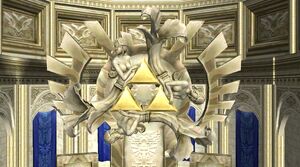 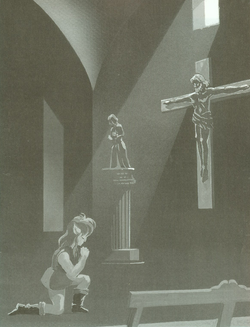 The primary religion of the Legend of Zelda series was initially Christianity, as it was prevalent during the Middle Ages, which the series drew inspiration from.[12] In the Japanese version of The Legend of Zelda, the Book of Magic was known as the Bible. In The Adventure of Link, the Cross was an item. In both respective games, Link's Shield and the Darknut's Shield both beared crosses akin to the medieval knights of the holy Crusades. In addition, Link was explicitly depicted kneeling and praying to a statue of Jesus Christ inside of a church in A Link to the Past's initial concept art.[12]

While Christianity is no longer prevalent in games released after A Link to the Past, remnants of its influence remain, as religion still plays a large role in the Hyrule Kingdom akin to its prevalence in medieval Europe. Throughout the land of Hyrule, many statues and structures can be found depicting various religious figures, the most prominent religion being the tale of the Golden Goddesses. In Hylian Mythology, the world was created through the combined efforts of Din, Nayru and Farore. Din created the physical world, Nayru gave the world law and order, and Farore created life to exist on the world. Tapestries and stained glass windows inside temples and Hyrule Castle depict these goddesses and other legendary figures, much like medieval Europe did for Christianity.[13] Twilight Princess in particular used real world medieval and Renaissance artwork in Castle Town to set the aesthetic. Statues of Saint Antoninus and Abundantia can be found there, as well as a painting of Leeds Castle and another castle called Vaux-le-Vicomte.[14][15] 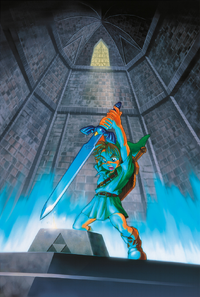 Link pulling the Master Sword from its pedestal, similar to Excalibur and The Sword in the Stone

The concept of the Master Sword being pulled out of its pedestal was inspired by the Arthurian Legend of Excalibur and The Sword in the Stone.[16] Link is chosen by the Goddesses, thus given the power to draw the Master Sword from its pedestal.[17] This parallels how King Arthur was divinely chosen and was able to draw Excalibur from the stone.[18] 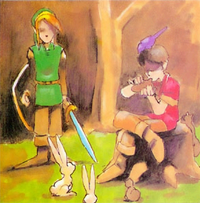 Many songs in the Zelda games use instruments such as the flute, lute, snare drum, violin, and harp which create a medieval vibe as they are instruments of that era. The older games simulated sounds of these instruments with MIDI (Musical Instrument Digital Interface). Castle Town's theme from Ocarina of Time, emulates the sound of a lute to set the atmosphere. The Legendary Hero from Wind Waker and the Minigame theme from A Link Between Worlds are prime example of the use of a flute, it creates a medieval feel.[19] The theme in Minish Woods and certain iterations of Zelda's lullaby emulates the sound of a harp creating a whimsical fairy tale vibe.[20] Certain iterations of Hyrule Castle's theme heavily feature the use of snare drums which create a warlike, militaristic, feeling representing Hyrule's army.

Music plays a role in the universe itself as many games feature instruments that Link can use, the most iconic being the Ocarina. The Ocarina's precursor, the Gemshorn was created in medieval Europe carved out of goat horns.[21]

In A Link Between Worlds, the Milk Bar has two musicians that play music on a lute and flute. The music from these instruments, as well as the setting evoke the vibe of taverns in medieval Europe. 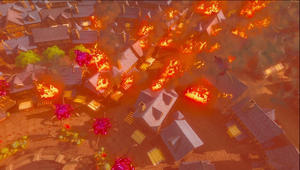 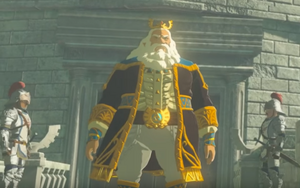 In Breath of the Wild, Hyrule Kingdom remains medieval as evident of swords, shields, bows, castles and knights. Upon discovering the ancient technology from their distant ancestors, the kingdom began to study it up until its collapse with the return of the Calamity Ganon. Unfamiliar with technology so advanced, Princess Zelda comments that they have much to learn and how shocking it feels knowing that the Guardians and Divine Beasts were actually created by people.[22]

The Temple of Time makes a return, albeit in a ruined state. Hyrule Castle and Hyrule Castle Town appear as well except the latter is mostly destroyed. This iteration of the castle contains all the staple locations of a traditional medieval castle: a dining hall, gatehouse, armory, dungeon, library, balcony, bedroom, and throne room.

Combat in Breath of the Wild provides Link with a large variety of medieval weaponry and armor in this adventure. In addition, magical staves make a return providing Link with magic based combat. 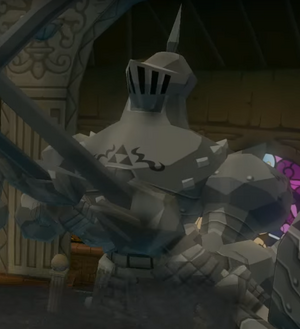 Despite being set in the Great Sea with a different culture than Hyrule proper, when Link enters Hyrule Castle under the ocean, the traditional elements return.

Hyrule Castle's exterior is made of stone brick and has visible crenels on it's walls. Inside the main hall there are many tapestries, statues and paintings. The Master Sword is held in a hidden chamber of the castle, surrounded by colossal statues of the Knights of Hyrule. The remnant of King Daphnes Nohansen Hyrule remains in the derelict castle.

The Hylian army at war in Hyrule Warriors
Non-Canon Information

Hyrule Warriors focuses on the armies of Hyrule fighting wars. Medieval warfare is present as the gameplay revolves around taking keeps and killing the opposing army. The protagonist is accompanied by an army of soldiers along with captains.