From Zelda Wiki, the Zelda encyclopedia
(Redirected from Matti)
Jump to: navigation, search

Shadow Link Battles are a game mode in A Link Between Worlds. It allows players to trade A.I.-controlled Shadow versions of their Links via the StreetPass feature of the Nintendo 3DS for the purpose of battling one another. 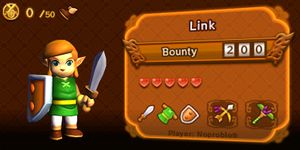 The setup screen for a player-made Shadow Link

Shadow Link Battles become available once Link has obtained a Sword and proceeds to speak to Gramps in Kakariko Village, who oversees the StreetPass Meadow.[1] Gramps excitedly describes the mode as a way to interact with the people we pass by in our daily lives, adding that there's nothing to lose and everything to gain by playing the mode, and goes on to explain how it works.[2]

To begin, Gramps tasks Link with creating a profile for a Shadow version of himself that will be transmitted to other players via StreetPass. The Shadow Link is given the same equipment, quest items, and number of Heart Containers as Link; essentially Link needs only to select up to two items from his current inventory that the Shadow Link will take into battle. The profile for this Shadow Link also displays Link's chosen name, the number of challenges he has completed, the bounty, which is the amount of Rupees awarded for defeating the Shadow Link and a measure of its abilities and difficulty, and the Player name, which is the nickname of the Nintendo 3DS console from which the Shadow Link originates.

This Shadow Link profile does not automatically update itself when Link acquires new equipment or Heart Containers, so Link must speak to Gramps and perform the setup again in order to upgrade the Shadow Link. 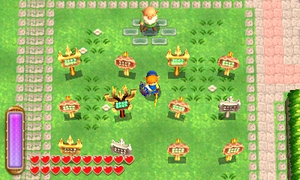 The StreetPass Meadow filled with signposts

Once the setup is completed, StreetPass will be activated for A Link Between Worlds and will continue to function even after the game is closed.[3] Gramps will commemorate the occasion by planting the StreetPass Tree near Link's House.[4] StreetPasses occur when two or more Nintendo 3DS systems, with wireless communications enabled, pass nearby and electronically "tag" one another. A successful tag is indicated by the system's status light flashing bright green, along with a notice in the Notifications menu.

In order to import these tags from the system's memory into A Link Between Worlds, Link simply needs to visit the StreetPass Meadow, where signposts signifying each newly-arrived Shadow Link will appear.[5] Each signpost displays the corresponding Shadow Link's name, bounty, number of challenges completed, Player name, and a description of the randomly-selected location where the Shadow Link awaits. Its equipment, Heart Containers and chosen items are left a secret until the Shadow Link Battle begins.

When Link encounters a Shadow Link in the overworld, he must speak to it and then choose to review the rules of the battle, view the list of challenges, or begin the battle. Link can only bring the two items set to the Y and X buttons into the battle, and cannot change items mid-battle.[6] The competitors will be transported to one of five arenas, roughly based on the Shadow Link's location, and the battle begins instantly. The Shadow Link is controlled by A.I. and will utilize his Sword, Shield, and items in a tactical manner. The first fighter to deplete his opponent's Life Gauge will win the battle, though either can be revived if they are carrying a Fairy. Battles are fought under a 3-minute time limit; if neither Link has defeated the other by this time, then the one who dealt the most damage to his opponent is declared the winner. If Link wins the battle, he will be awarded the Shadow Link's bounty in Rupees. Any Life that Link has lost or items expended during the battle will be replenished afterward, regardless of who wins. If Link is defeated, any rented items won't be reclaimed by Sheerow.[7] 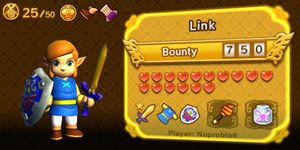 The bounty for each Shadow Link is scored based on the quality of that Shadow Link's equipment, the quest items he possesses, and the efficiency of the chosen items he brings into battle. In addition, each full Heart Container beyond the starting three adds 10 points to the bounty; having all 20 Heart Containers therefore adds 170 points.

The minimum bounty for a Shadow Link is 50, with the maximum being 999. The size and color of each signpost in the StreetPass Meadow reflects its bounty. Items that have no bearing on Shadow Link Battles, such as the Power Glove, Zora's Flippers, and Pendants of Virtue, do not count toward the bounty.

The bounty value of each item is as follows: 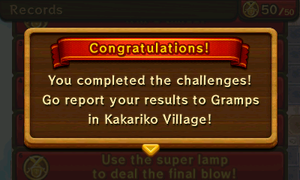 Challenges, also known as records and medals, are a series of 50 achievements Link can earn by fulfilling certain conditions while competing in Shadow Link Battles. They range from winning set numbers of battles, to using specific items in battle, to other challenges such as winning within a time limit or without pressing certain buttons. Newly-achieved challenges are tallied after each successful battle, and it is possible to achieve multiple challenges in a single battle.

Completing a challenge involving a Nice item will also complete the challenge for the regular version of that weapon, therefore no challenges are permanently missable. In order for the challenge to count as completed, the item must damage or otherwise make contact with the Shadow Link. Likewise, a Shield must deflect at least one of the Shadow Link's attacks for its challenge to count as completed. The challenge "Win after using Ravio's Bracelet!" requires Link to Wall Merge during the battle, which can only be achieved in certain arenas.

After all 50 challenges have been completed, Link can speak to Gramps to find out that he is only the second competitor to achieve the feat—the first being Gramps himself.[8] He will then be given the opportunity to battle Gramps, who possesses all the strongest equipment, 20 Heart Containers, and two random Nice items, despite carrying a bounty of only 5 Rupees.

An arena that is held in the sky and features the Royal Crest in the middle of the stage. While there are no traps, Link and Shadow Link can fall off the edge.

A clearing in a forest, featuring grass that can be cut for Hearts, Bees, and Fairies. There is also an Apple tree in the center, where Link and Shadow Link can eat Apples to regain health. 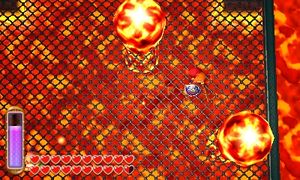 The fire pillars that randomly appear in the arena

The arena is a grated metal platform over a lake of lava, where jets of lava will burst up and through the floor at random. Link can use Ice Rod to freeze the lava and use Ravio's Bracelet to Merge into the resulting column, making the Fire Arena one of the two possible arenas to complete the "Win after using Ravio's Bracelet!" Challenge.

The arena is a platform made of ice, with breakable ice tiles in the center and several Bumpers near the edges. Both Bombs and the Fire Rod are capable of breaking the tiles, which can be used as a trap.

The arena is covered in sand, making it possible to use the Sand Rod to create sand pillars which can be Merged into using Ravio's Bracelet. Devalants will emerge from the sand, creating sinkholes that the competitors can fall into.

The Desert Arena is the rarest of the arenas; fights usually occur here only if the Shadow Link is encountered in the Desert of Mystery.

Occasionally, a Shadow Link will appear without being met by StreetPass. This occurs once every few hours of gameplay, as long as Link has visited the StreetPass Tree at least once. These Shadow Links come from a supposed Player named Shade and are selected at random from the following list of 20 pre-generated characters, coming in a variety of bounties and item selections.