Makar's Violin is an item featured in The Wind Waker.[name reference needed] As its name implies, it is a violin that belongs to Makar. Makar practices playing his Violin year round so that he is prepared for the annual Korok Ceremony.[1] Makar's Violin plays an important role in the game due to it being required to awaken Makar as a Sage as well as restoring the Master Sword's true power.

Makar received his Violin at birth as a gift from the Great Deku Tree, likely foreseeing Makar's destiny.[2] 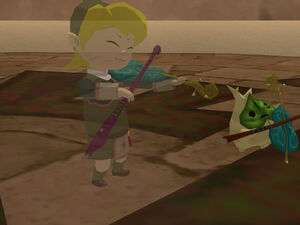 Fado and Makar playing the "Wind God's Aria" on their Violins

After Link meets Fado, the former Sage of Wind before Ganondorf murdered him, he informs the young hero that he must look for the one who carries the same sacred instrument as him, a Violin, and play the "Wind God's Aria", the melody that will awaken the new Sage of Wind.[3] The young hero then travels to the Forest Haven, where he finds Makar practicing his Violin in a cavern hidden behind a waterfall. As instructed by Fado, Link conducts the "Wind God's Aria" as Makar plays along with his Violin, which causes Makar to realize his fate.[4] Makar then urges Link to take him to the Wind Temple to thus complete his duty as the Sage of Wind.[5]

Inside the Wind Temple, Makar's Violin plays an important role of opening up blocked doorways when Makar plays the "Wind God's Aria" in front of them.

After defeating Molgera, Link conducts the Wind God's Aria for Makar as he plays the song on his Violin. As they play it, Fado temporarily appears next to Makar to play along. This restores the remaining power of the Master Sword, to which Makar takes notice and begins to cry with joy that he was able to help restore the Master Sword and please his ancestors.[6] Makar remains in the Wind Temple to assure the power to repel evil stays in the Master Sword, which is done so by continuing to play his Violin.