The Book of Magic can be found to increase the power of the Magical Rod. After obtaining it, the Magical Rod's attack leaves a fiery blaze, similarly to the Candle, when it makes contact with an enemy or wall. This also allows the Magical Rod to be used in lieu of the Candle to light up pitch dark rooms.

There are some enemies the Magical Rod does less damage against, or cannot damage at all, such as Crows, Takkuri, and Stalfos. The Magical Rod is also notable as the only item other than the Magic Powder that can kill a Cucco and a Mutt.[6] 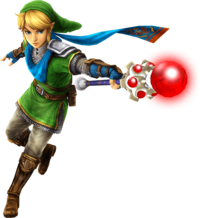 The Magic Rod is a class of Weapon used by Link in Hyrule Warriors. It is associated with Fire. It can shoot wide-ranged projectiles and conjure pillars of flames to juggle enemies. The Rod is also capable of changing shape, such as forming a flamethrower, transforming into a larger staff to emit flame-based energy beams, and transforming into a fiery battleaxe.

An 8-Bit version of the Magical Rod from The Legend of Zelda, called the 8-Bit Magical Rod?, appears as the Lv.★ form of Lana's Spear. It was added to the game with the Twilight Princess Pack DLC in Hyrule Warriors.

The Lv.1 Magic Rod is the Fire Rod. It resembles the Fire Rods of later game appearances like A Link to the Past and Four Swords Adventures.

The Lv.2 Magic Rod is the Prism Rod.

The Lv.★ Magic Rod is the 8-Bit Candle, which is based on the Red Candle from The Legend of Zelda. It was added to Hyrule Warriors with the Master Quest Pack DLC. In Hyrule Warriors: Definitive Edition, instead of appearing as a separate Weapon, the 8-Bit Candle replaces the Crackling Rod when the "8-Bit Weapons" Setting is turned on in Game Settings within the Settings menu.

The Lv.4+ Magic Rod is the Crackling Rod, which was added to Hyrule Warriors Legends with the Phantom Hourglass & Spirit Tracks Pack DLC and is unlockable in Hyrule Warriors: Definitive Edition. As a Multi-Element Weapon, the Crackling Rod is also associated with Lightning. It has the same form as the Magical Rod but with an orange color scheme.

Link points the Magic Rod skyward which opens, releasing a fiery dragon that corkscrews ahead for a moderate distance. The attack can hit enemies behind Link as the dragon coils behind him.