For a list of all the secrets obtainable in a Linked Game, proceed to Linked Game/Secrets.

Linked Games are situations in which Oracle of Seasons and Oracle of Ages are interconnected, allowing for exclusive content not found in the individual games.[1] A Linked Game is a game file of either Oracle of Ages or Oracle of Seasons, where one game serves as the continuation of the plot that began in the other, instead of having two alternate plots if the games are played separately.[2] Linked Games are accomplished via passwords (referred to in-game as "Secrets") which allow the two games to interact.[3] In Linked Games, Link will obtain various items that are not otherwise obtainable.[4]

"Password-Linking" is a unique feature of Oracle of Seasons and Oracle of Ages.

An example of a "Secret to Holodrum"

The exact password that appears as the Secret to Labrynna or Holodrum will vary depending on how the game was played (which animal companion Link had, how he raised Bipsom, and so on). The password assures that Link will have the same animal companion and the same son of Bipin and Blossom in the Linked Game.

In a Linked Game, Link begins his adventure with his Wooden Sword, and with four Heart Containers instead of three.[9]

The main purpose of a Linked Game is to connect the plots of Oracle of Ages and Oracle of Seasons, in order to conclude to the series. A Linked Game witnesses the arrival of Princess Zelda to the lands of Holodrum or Labrynna, who is captured later on in the game by Twinrova, to be offered as a sacrifice for the resurrection of Ganon. By freeing both Oracles, Din and Nayru, by defeating General Onox or Veran, respectively (whichever is left), they are able to transport Link to the Room of Rites, a dungeon found only in a Linked Game. Here, Link fights Twinrova and, ultimately, Ganon.[4] Defeating Ganon concludes the Linked Game.

There are several more alterations to the games made in a Linked Game. Characters that are found in both games, such as the Piratians, Bipin and Blossom, or Link's animal companions (Ricky, Moosh and Dimitri), will recognize Link from their past adventures. Even certain characters specific to one game will have heard of Link's deeds in an other land.[9] There are many events that happen in each game that would not otherwise happen. 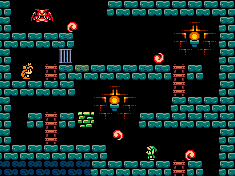 In a linked Oracle of Ages, Impa appears at the Black Tower partway through the game. She warns Link that Vire has kidnapped Princess Zelda and taken her into the tower, and asks him to go save her.[10] The rescue of the Princess plays out like the original Donkey Kong game, with Vire as Donkey Kong, Princess Zelda as Pauline, and Link as Jumpman (Mario). After she is saved, she will give Link the Blue Joy Ring.

Also, Rosa will appear on Crescent Island in the past.[11] She will help Link get back his Shovel after his items are stolen by the Tokay.[12] Rosa will appear once again in the present on Rolling Ridge along with several other Subrosians, who have come to learn of the Goron Dance.[13]

In a Linked Game, the Piratians appear in the present instead of the past, meaning the Sea of Storms is explored in the present as well, something that would not otherwise be possible.

The most notable of password-linked events is the appearance of Queen Ambi in a Seasons Linked Game. In this event, the storyline brought up but never completed in Oracle of Ages of Queen Ambi's long lost lover is concluded.[14] After clearing the Ancient Ruins, Queen Ambi appears at the entrance to Samasa Desert, being transported from past-age Labrynna to present-age Holodrum by the powers of Nayru.[15] The queen reveals she is looking for her long lost lover, who turns out to be Cap'n of the Piratians.[16][17] After a touching reunion, the Piratian captain expresses regret at not being able to stay with the queen, unable to resist his calling as a seafaring man.[18] Understanding, Ambi says she will always wait patiently for his return.[19]

After clearing Snake's Remains, Impa will be worried out of her mind for the safety of Princess Zelda and will ask Link to find her.[20] After going north a short distance, Link will run into the Great Moblin and his thugs attempting to rob and kidnap Princess Zelda.[21] After seeing Link, the Great Moblin complains about how he must have followed him from Labrynna to harass him and then challenges Link to a fight.[22] Fighting off the Great Moblin will earn Link the Blue Joy Ring.

Another addition is the appearance of an extra dungeon, called the Hero's Cave. In Oracle of Seasons, this replaces the original Hero's Cave, a mini-dungeon where Link obtains his first Sword (in a Linked Game, his sword is already given to him by Impa). In Oracle of Ages, the Hero's Cave appears on a deviation of the Maku Road. This dungeon is considered to be one of the most difficult of the two games. The reward for completing it is the blue Armor Ring L-3 in Ages, and the red Power Ring L-3 in Seasons.

Once two game files of Oracle of Ages and Oracle of Seasons have been linked, appraised Magic Rings can be transferred between the two games with the help of either the Red Snake or the Blue Snake at Vasu Jewelers.

Secrets are the centerpiece of a Linked Game. On top of the Secret to Holodrum/Labrynna that begins a Linked Game, and the Ring Secret that allows Link to transfer his Magic Rings, Link will obtain many more secrets during the Linked Game by talking to certain people in the game.[25] These secrets are then told to a specific character in the first game Link completed. After telling the secret, a mini-game often ensues. Telling secrets rewards Link with a special item which is otherwise unobtainable.[26][27] Notable password-linked items include the Master Sword, the Mirror Shield, Bomb and seed capacity upgrades, Bombchus, Biggoron's Sword, and the L-3 Ring Box. A few powerful rings can also be found only through a Linked Game. All of these items are optional, but can be very useful to Link on his quest.

This system is held together by Farore, who resides in the Hall of Secrets found within the Maku Tree in both Oracle of Ages and Oracle of Seasons. Farore is the keeper of Link's secrets. When an item is obtained through "password-linking", Link also receives another password that allow him to bring said item back to the land opposite the one he is in (i.e., bringing an item obtained in Labrynna in Oracle of Ages using a password from a Linked Game in Oracle of Seasons, and using the return password to bring it back to Holodrum, and vice-versa). This password is presented to Farore in the opposite world in which the item is obtained. Farore will then transfer the item from Holodrum into Labrynna, or Labrynna into Holodrum.[27] The secrets are recorded in Farore's Memory, available to Link at any time.[28]

On the File Selection Screen, a Hero's Game is identified by a Triforce in the upper-right.