Link and the Portal of Doom

Link and the Portal of Doom is a short children's novel by Tracey West published by Scholastic in 2006.[1] The book takes place shortly after the events of the Ocarina of Time, when a strange interdimensional portal appears and threatens to engulf Hyrule.

This book was distributed through the school market and included a sticker sheet insert.

Link is walking through Hyrule Field when a farmer tells them that his Cuccos have escaped Link goes off to find them in the forest, suspecting that wolves may be eating them. When he gets there, he finds that the Cuccos are all being sucked into a strange vortex.

When he tries to investigate, the portal begins to draw Link in. Link is able to escape the portal's pull when he is no longer directly in front of the vortex, but he wonders how to stop the portal from sucking everything in. His concern is that it may even devour the entire land of Hyrule. Navi concludes that the portal must lead to an alternate dimension, and then Link notices a map of Hyrule carved into a wall. Unfortunately, it's in the Ancient Hylian text, and he is unable to read it. But then, Kaepora Gaebora shows up, and is able to translate it for Link. The text says: Open I will, when the stars align and the full moon hangs in the summer sky. A door to a world beyond this world. A world of danger, terror, strife. Close I will, when the song is played. Close till the stars align once more. The map has five musical notes on it, one for each region of Hyrule. Link concludes that there must therefore be five parts of the song he needs to learn. The first musical note marks Hyrule Field, and so Link and Navi head that direction, only to be attacked by a Stalchild.

Chapter 3: A Message From Zelda

As the Stalchildren rise from the ground to attack him, Link becomes overwhelmed and is knocked unconscious. While asleep, he receives a telepathic message from Princess Zelda telling him that "Help is just beyond the Oak Trees." When he wakes up, he finds a Fairy Fountain where the fairies heal him and teach him the first five notes of the song he needs to close the portal. 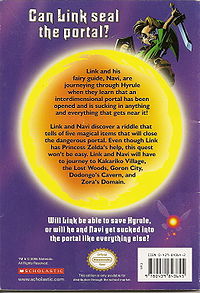 Chapter 4: Into the Lost Woods

Chapter 5: The Road to Death Mountain

After taking a tunnel out of the Lost Woods, Link and Navi find themselves in Castle Town. Link buys some food, but then notices the sturdy Hylian Shield at the Bazaar and buys it after haggling with the vendor. Link heads off toward Death Mountain, but is suddenly attacked by Tektites.

Link defeats the Tektites with his Fairy Bow and then heads inside Goron City, where he finds a Goron merrily beating out the same five notes on some stalagmites. The third note on his map begins to glow, and Link learns the third part of the song.

After heading into Dodongo's Cavern to find the fourth piece of the song, Link and Navi are attacked by a Lizalfos. He defeats it with the help of a Bomb Flower and his Slingshot and then stops to drink a potion to heal his wounds. However, several Fire Keese attack, and Link discovers that he had dropped his Hylian Shield during the battle with the Lizalfos. He becomes disoriented and weak, and finally collapses. He mutters "I'm sorry Princess, I have failed you."

Chapter 8: A Tie to the Princess

Princess Zelda hears Link's call for help and begins to sing Zelda's Lullaby in an attempt to help Link.

Back at Dodongo's Cavern, the sound of Zelda's song reaches Link's ears. He plays the tune on his Ocarina, and it uncovers a secret chamber in the cavern. Inside the chamber, a fairy heals Link, and he discovers the fourth part of the song in the sounds that the lava bubbles make as they pop.

Link heads to Zora's River to find the last segment of the song, which he learns from the Frog Chorus. Just as he is about to head back to seal the portal, however, he is attacked by an Octorok, which pulls him underwater.

Link wrestles with the Octorok underwater, until Kaepora Gaebora returns and gives him his sword. Link slays the creature and Kaepora Gaebora flies him back to Kakariko Village.

Chapter 12: Inside the Vortex

Link returns to the portal, and plays all of the combined songs for the portal while it is trying to suck him in. The portal starts getting weaker as Link keeps playing. The portal then almost sucks him in, but Zelda and Impa pull him out just in time. The portal closes and Hyrule is saved. Link then says that he and Zelda will protect Hyrule together.