Link's House,(TMC | BotW)[1][2] also known as Link's Cottage,(ALttP)[citation needed] is a recurring location in The Legend of Zelda series. It is Link's place of residence in several games in the series. It is usually located somewhere within the kingdom of Hyrule.

Link's Cottage is located in a somewhat central location of Hyrule, with Hyrule Castle nearby in the north in A Link to the Past. It is a simple building, containing basic, wooden furniture, and is home to both Link and his uncle. Next to Link's bed, which is situated in the house's northwest corner, are three Pots that each contain a recovery Heart. A Treasure Chest located in the southeast corner of the house contains the Lantern, which will likely be the first item that Link collects in his quest. However, if the Treasure Chest is opened after already receiving the Lantern elsewhere, it will instead contain a Blue Rupee.

At the beginning of the game, Link receives a telepathic plea for help in his sleep from Princess Zelda, who mentions that she has been locked in the dungeon of Hyrule Castle by Agahnim.[3] He wakes up in time to see his uncle about to leave the house, armed with a Sword and Shield. Upon seeing that Link is awake, Link's uncle promises that he will be back by morning and tells Link not to leave the house.[4] Link, however, disobeys his uncle's orders and leaves to investigate the castle. Later, during the game's end credits, Link is shown to be practicing sword fighting with his uncle outside of their home.

In the Dark World, the Bomb Shop corresponds to where Link's Cottage would be located.

Ocarina of Time begins with Link being woken up inside his house from a nightmare involving Princess Zelda by Navi the Fairy, on the orders of the Great Deku Tree. Here at Link's House in the Kokiri Forest is where the two companions first meet, although Navi's first insistence is that Link leaves the house to visit the Deku Tree with haste. The house is more or less irrelevant in the game after a point, although an interesting feature that keeps its use alive is a scoreboard within the room, with which Link can inspect his achievements in various mini-games throughout Hyrule.

When loading a saved game, young Link will begin in his home if the game was saved while he was not in a dungeon. Link can obtain a Cow that stays in his house after beating Malon's record of the obstacle course at Lon Lon Ranch as an adult.[5]

In Ocarina of Time 3D, Link has the option to sleep in his bed in the house. By doing this he can either recover his health, or access the Boss Challenge Mode, where he can refight any boss which he has defeated in his quest. A Sheikah Stone can also be found just outside his house. 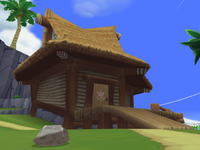 Link's House on Outset Island from The Wind Waker

In The Wind Waker, Link and his younger sister, Aryll, live with their grandmother in a house on Outset Island. The house becomes fundamental to more elements of the game's plot than most other games in the series, with Link having to return on various occasions to find a Shield and to release a Bottled Fairy onto his ailing grandmother,[6][7] resulting in her infinite offerings of free, revitalizing Elixir Soup.[8] A crawl space can also be found under the house, containing a Chest with an Orange Rupee.

Later in the game, Link also receives the Deed from Mrs. Marie to the Cabana on the Private Oasis, thereby making it his.[9] There he gains access to a labyrinth beneath the island, which houses a Triforce Chart. Link can also play a Sliding Puzzle and earn Rupees as a reward in the Cabana.

In The Minish Cap, Link lives with his grandfather, Smith, Hyrule's famed swordsmith. The two-storied home doubles as a smith's forge in addition to being a residence. It has a similar appearance to its A Link to the Past incarnation. It rests on a plateau in South Hyrule Field. Princess Zelda seems familiar with this home, as she is Link's childhood friend and visits early into the story to awaken Link for the Picori Festival. Later in Link's journey, he has the option to stay here for the night to recover lost Hearts, as well as fuse Kinstone Pieces with Smith, who can always be found at home smelting.

In Twilight Princess, Link lives in a tree house in Ordon Village that has a similar appearance to Link's house in Ocarina of Time. It contains a basement and a few platforms with ladders, and at the top there is a window which Link can look through. A pot of boiling soup can be found over a burning fire that is kept lit throughout the game. There is also a green flag with a triangular symbol, similar to the Triforce, above the house's door. The basement contains a Treasure Chest with 50 Rupees in it, though the room is so dark that it may require the Lantern to find it. Also in the basement is a large mirror which Link can see his reflection in. Near the beginning of the game, Rusl will deliver the Wooden Sword to Link's House.

Exterior of Link and Niko's House from Spirit Tracks

In Spirit Tracks, Link and Niko's House is located in Aboda Village. As its name suggests, it is shared by Link and Niko. In it at the beginning, Niko tells the events of the War that happened between Malladus and the Spirits of Good, and how Tetra's Pirate Crew saved the land from destruction. It contains many objects that reference The Wind Waker and Phantom Hourglass, including a Telescope, a framed picture of a younger Niko, Ship Parts, and a miniature version of Tetra's Ship.

Link's House from A Link Between Worlds

In A Link Between Worlds, Link's House appears in the same location it was in A Link to the Past.[10] However, it is much smaller and Link is the only person to live there at first. Ravio moves in shortly after Link's failed confrontation with Yuga, and later sets up a rental shop within the home.[11] Link can return here at any time to rent items from Ravio. Eventually, Ravio allows Link to purchase the items he has for rent.[12]

Lorule's equivalent of Link's House is the Vacant House, inside which Link finds a Treasure Chest containing an empty Bottle. The Vacant House is implied to be Ravio's, given the presence of his journal there when the game is played in Hero Mode.

The exterior of Link's House in Breath of the Wild

In Breath of the Wild, Link can discover a house that is currently in the process of being demolished by the Bolson Construction Company in Hateno Village. If the boss, Bolson, is spoken to, he will offer to let Link buy the house for 3000 Rupees, plus 30 bundles of Wood. This intiates the Hylian Homeowner sidequest. The building comes with a Weapon Rack that Bolson gives Link as a housewarming gift. After the house is purchased, Link can buy additions such as a door, a bed, additional lighting, and Bow, Shield, or Weapon Racks, as well as having Bolson decorate the exterior.

Link's House is a location in Cadence of Hyrule.[13] If the player chooses Link for their save file, Link's adventure will begin here.[14]