Linebeck is a recurring character in The Legend of Zelda series.[5][3]

Linebeck is the captain of the SS Linebeck steamboat, which Link uses to travel the World of the Ocean King for the full course of the game.[6] Linebeck travels the world seeking treasure, which seems to be his driving force in everything he does, including accompanying Link.[7]

Prior to the events of Phantom Hourglass, Linebeck visited Oshus and Ciela at their house on Mercay Island to ask them about the Ghost Ship.[8]

Link meets Linebeck in the Temple of the Ocean King on Mercay Island early in his journey. He is told about Linebeck by Oshus, an old man living on the island, who tells him to go to the port to see him.[9] While the SS Linebeck is docked there, its captain has been gone, presumably to Mercay Tavern, the nearby Milk Bar.[10] However, upon entering it, Link discovers that Linebeck had left to the Temple for treasure.[11]

Linebeck is then found on the first floor of the Temple, trapped by spikes, and he asks Link to help him, saying that he hurt his ankle and could not do it himself.[12] After being rescued, he runs off, telling Link to find the Sea Chart he was looking for inside.

Eventually, Link and Linebeck agree to work together, sailing onward to the Ghost Ship, Link to rescue Tetra, and Linebeck to investigate the rumors of treasure on it.[7] After it is revealed that the treasure of the Ghost Ship never existed, Linebeck decides to no longer allow Link to use his ship.[13] However, Oshus, later revealed to be the Ocean King, promises to grant him one wish if he continues to help Link.[14] Linebeck has an immediate change of heart when faced with the fact that he could have any treasure in the world, and quickly moves out to continue the journey.[15] 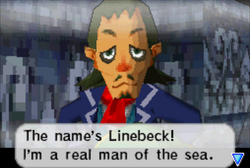 Near the end of the game, Linebeck and Link board the Ghost Ship after attacking it, though the SS Linebeck becomes sunken in the fight. Suddenly, Link is captured by Bellum, the monster who controlled the Ghost Ship and was behind the petrification of Tetra. A terrified Linebeck uses the Phantom Sword dropped by Link to stab the weakened Bellum in one of his tentacles, freeing Link. However, Bellum manages to attack Linebeck and possess him,[16] turning him into a monstrous knight akin to a Phantom, and forces Link to fight him. Link eventually triumphs, defeating Bellum without injuring Linebeck, freeing him. Linebeck seems disgusted with himself for attacking Link, even though he had the excuse of being possessed.[17] However, Link and Ciela forgive him.[18]

During the end of the game, Oshus in his true form as the Ocean King, asks Linebeck to tell him what his promised wish was.[19] Instead of treasure as the others were expecting, Linebeck's only wish is to have his previously sunken boat fixed.[20] This shocks the others, but his wish is granted, and the SS Linebeck is restored.[21] The final scene of the game is shows Linebeck's boat sailing away and tooting its horn. 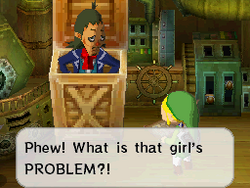 People on the islands Link visits seem to have a respect or admiration for Linebeck, calling him brave and wishing to travel the seas like him.[22] However, Link and Ciela see a different side of him, different from the persona he puts up as a brave adventurer. Instead, Linebeck shows himself to be for the most part a coward, running away from trouble and staying with his boat instead of going into the dungeons with Link.[23]

Ciela and Linebeck also constantly fight throughout the course of the game. The two rarely call each other by their real names, instead using insulting nicknames, and are almost cruel to each other at points. However, by the end of the game, they have reluctantly gained respect for each other.

Because he travels with Linebeck, Link meets Jolene, a pirate girl who travels the seas to get revenge on him. When she spots the SS Linebeck, she immediately attacks and ambushes it, fighting Link while Linebeck hides in a crate to watch.[2] Eventually, Linebeck tells Link how he met Jolene. At one point in the past, he had accidentally saved her from a monster that he was trying to escape. Because of this he and Jolene became friends and sailed together for a while, until Linebeck stole some of her treasure and ran away, which caused Jolene to seek revenge.[24] After a final match, Jolene tells Link that he has eyes like the man who captivated her and tells Linebeck to take notes, which hints at an emotional attachment she holds for Linebeck.[25]

Linebeck's grave later appears in Spirit Tracks in the re-established kingdom of Hyrule, revealing that he also came to the new land and made a family there. His grandson, Linebeck III, appears in the game as the spitting image of his grandfather.

Linebeck appears as a Sticker in Super Smash Bros. Brawl.

In the Phantom Hourglass manga by Akira Himekawa, Linebeck was part of an investigation of the Ghost Ship. His crew-mates were busy celebrating over the treasure they found, which was really an illusion. One by one the crew was disintegrated, leaving Linebeck, who fled in the life-boat.

In this manga, it is revealed that the treasure Linebeck stole from Jolene was squid jerky.[26][27]

Linebeck appears as a Trophy in Super Smash Bros. for Nintendo 3DS.

Linebeck is a Master Spirit who oversees expeditions into the Jungle in Super Smash Bros. Ultimate. Upon entering the Jungle, explorers are greeted with promises of "great fortune" and is encouraged to assemble a team of Spirits to embark on an exploration of the Jungle.[28] If no team of Spirits is deployed and the location is left, Linebeck will be ashamed and encourage them to come back soon.[29] If an incomplete team of Spirits is disbanded, Linebeck will be disappointed and will ask for confirmation.[30] However, if a team is deployed, he will be happy to send Spirits on an exploration.[31]

Luigi's appearance in Linebeck's Spirit Battle is a reference to Linebeck's cowardly nature. The Stage, Wuhu Island, is permanently set to the cruiser in reference to the SS Linebeck.