From Zelda Wiki, the Zelda encyclopedia
(Redirected from Knights of Hyrule)
Jump to: navigation, search

The Knights of Hyrule,(ALttP)[1] also known as Hylian Knights,(TAoL)[2] are a recurring group of characters in The Legend of Zelda series. They are the protectors of the Royal Family of Hyrule. They played a large role in A Link to the Past, in which they fought valiantly against Ganon in the backstory;[3] and in Four Swords Adventures, in which they guarded the Royal Jewels but were cast into the Dark World and corrupted by Ganon.

The Knights of Hyrule are revealed to be a powerful clan that were descended from the legendary hero's spiritual successors who governed the crest of courage.[4][5] The knights serve the purpose to protect the Royal Family of Hyrule, the Goddess Hylia's mortal descendants for generations.[6] An incarnation of the legendary hero, Link, usually is born from the knightly bloodline[7] and often has the objective to be Princess Zelda's personal guardian.

Their symbol is the Hylian Crest used to represent the Crimson Loftwing and the sacred relic of the Golden Goddesses: the Triforce, which are also featured on the Hylian Shield, said to be used by the knights.[8]

With the history of Hyrule splitting and taking three different paths after the events of Ocarina of Time, the historical appearances of the Knights of Hyrule also splits, giving them three different destinies over the course of the three histories.

The River Man from the Water Town of Saria is similar in appearance to the Knight from Mido, but with darker color.

The war between the Knights and Ganon's army.

The backstory of A Link to the Past tells of a conflict known as the Imprisoning War in which the Knights fought valiantly to protect the Sages while they cast their seal over the Sacred Realm.[3] These Knights were almost wiped out in the war against Ganon,[9] but their line continued until the last of the Knights' bloodline, Link, could fulfill the prophecy of the Great Cataclysm.[10][11] 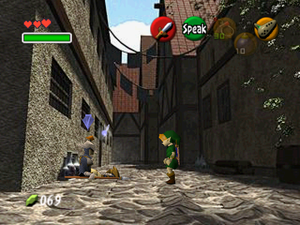 The wounded soldier, who dies trying to save Zelda

While only the Soldiers make on-screen appearances in this title, the Knights are mentioned in dialogue. The Hylian Shield is mentioned as being the type of shield used by the Knights.[8] Link finds a wounded soldier in a back alley who tells Link of how he tried to save Zelda from Ganondorf.[12] The death of this soldier is seen by many fans as a nod to the heroic knights who defended the Sages during the backstory for A Link to the Past. It is never stated whether this soldier is a member of the Knights, however.

The Hero of Time might have been a Knight of Hyrule or was descended from the knights.[4]

Link, Din, Impa and the Hylian Knights disguised as a troupe of performers

The Hylian Knights make an appearance in Oracle of Seasons, disguised as a Troupe of Performers.[13] Under orders from Princess Zelda, they sneak Din out of Holodrum into Hyrule.[14] However, they are quite easily taken out by the General Onox.

It should be noted that the troupe only reveals themselves to be Hylian Knights in a Linked Game, continuing from the events of what happened in Oracle of Ages. 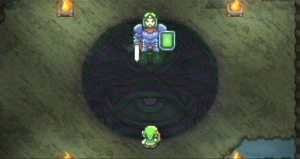 Guardian of the Green Jewel

The Royal knights are charged with the task of guarding the four Royal Jewels in Four Swords Adventures.[15] Link must collect these jewels in order to save Hyrule.

The Knights were twisted by Ganon's dark magic and transformed into Big Dark Stalfos.[16] Link is forced to kill each of the four Knights in order to free them from the evil magic's influence.

The Red Knight mentions that Ganon used a "mighty weapon" to trap them in the Dark World.[17] This refers to the evil Trident that Ganon stole from the Pyramid. 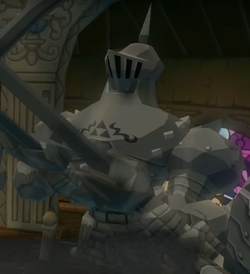 Statues of Knights in Hyrule Castle

The Knights are only mentioned in passing in this game, but it is mentioned that even they could not attempt to lay siege to Ganon's Tower.[18] A common spoils item found in the game is the Knight's Crest, which is said to signify a mastery of swordsmanship for its owner.[19][20][21]

These crests are the "symbol of a courageous knight".[20] It is possible that swordsmen like Orca collect these crests to honor the Knights' legacy or as a symbol of courage. Collecting 10 of these crests allows Link to learn the Hurricane Spin, a move that is known to have been used by the Knights.[22]

There are also statues of several Knights in Hyrule Castle in the room where Link meets Daphnes Nohansen Hyrule. 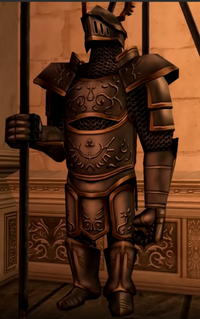 Hylian Knights in Hyrule Castle have empty suits of armor stationed throughout.

In Twilight Princess, Ashei's father is said to be a knight in his own right. However, it is unclear if he was actually a Knight of Hyrule.[23] 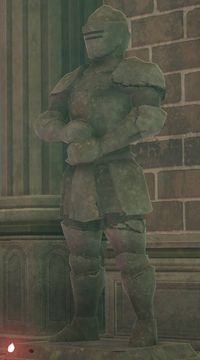 In Breath of the Wild Link was a knight and served as Princess Zelda's personal bodyguard 100 years prior to his reawakening. Link's father was said to be a member of the Knights of Hyrule.[24]

There are several pieces equipment in the game that the Knights of Hyrule used. Such as the Knight's Bow, Knight's Broadsword, Knight's Claymore, Knight's Halberd, and Knight's Shield.

There is also Knight equipment for Link's horse. The Knight's Bridle and Knight's Saddle are obtained from a minigame. 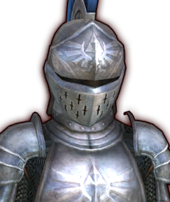 In Hyrule Warriors, Knights take the rank of Captains, which are stronger variants that take lead and take on various other roles determined by their type, as well as Generals or Commanders, which are typically much stronger Soldiers that are crucial to a Force. 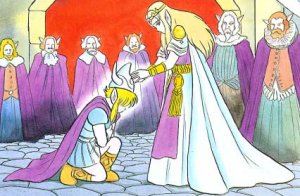 Like in the game, Link is a descendant of the Knights of Hyrule in the A Link to the Past comic by Shotaro Ishinomori.[25] Because Link's parents stumbled into the Dark World, he was adopted by his uncle, who shielded him from the intrigues of the Royal Family.[26] After Agahnim kills Link's uncle, he orders that all those in the Knight's Line must be eliminated at once, including Link.[27] Other than Link and his family, it is also mentioned that Roam is a descendant of a master archer from the ranks of the Knights of Hyrule.[28]

After Link defeats Ganon and restores peace to Hyrule with a wish from the Triforce, the newly-crowned Queen Zelda appoints Link as the Master of the Knights of Hyrule.[29]

The Knights of Hyrule are mentioned by Sahasrahla briefly in his telling of the events of the Imprisoning War in the A Link to the Past manga by Akira Himekawa. He describes them as "fighting valiantly against the evil..." and that many lost their lives in their heroic effort to stop evil.[30]

In the Ocarina of Time manga by Akira Himekawa, it was revealed by Rauru that Link's Father was a Knight of Hyrule who protected the Royal Family including his family, until he was killed in the Civil War, making his son, the future Hero of Time a descendant of the Hylian Knights.

In the Four Swords manga by Akira Himekawa, Link's father is a Knight of Hyrule who often has to curb his son's obstinance and tendency to rush into situations without relying on his allies. He is captured and brainwashed by Vaati, and is forced to duel his son, tricked into thinking that he is Shadow Link. He manages to break the curse himself by tossing a knife at Vaati, who had impersonated Princess Zelda. The Link from Four Swords Adventures would be the latest descendant of the Knights as well.