Knight's Crests are items in The Wind Waker.[1]

The Knight's Crests are the symbol of a courageous knight that are commonly dropped by Darknuts.[2] They can also be looted from them using the Grappling Hook,[3] but only when they have lost their helmet. From the moment Link arrives at Windfall Island in search of Bombs, he can visit the Postbox at any Island to receive a letter from Orca telling him to collect Knight's Crests. Once 10 of them are found, he may bring them to Orca at Outset Island to learn the Hurricane Spin.[3] Afterwards, they can be sold to Beedle in his Shop Ship for five Rupees in The Wind Waker and 20 Rupees in The Wind Waker HD. They are kept in the Spoils Bag. 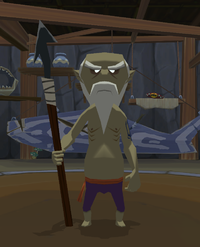 The Knight's Crest on Orca's shelf