Kinstone Fusion is an ability in The Minish Cap.[1]

Kinstone Fusion is the art of matching two complementary Kinstone Pieces with someone else, a Mysterious Wall, or a specific marker in the overworld, resulting in a completed gold, red, blue, or green medallion. Kinstones only match with the precise complement of the other, despite the many variations and colors of Kinstone Pieces. Their alignment creates a form of "good luck" for Link including, but not limited to: Treasure Chests containing other Kinstone Pieces, Rupees, or inventory items, unblocked passageways, and the triggering of sidequests. 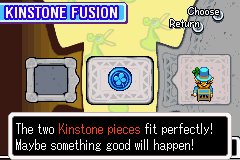 Fusing Kinstones with the Hurdy-Gurdy Man

In certain areas of the overworld, such as Castor Wilds, the Cloud Tops, and the Source of the Flow at Veil Falls, Gold Kinstones must be fused with specific markers such as statues or cloud forms in order to pass to the next area. The golden complements of these Kinstones will always be found in the same area that requires them to be joined. Unlike the Red, Blue, and Green Kinstones which can be found anywhere, these can only be found in specific locations and can only be used where there is a specific need for them.

The Mysterious Statues are three large statues in the southwest corner of Castor Wilds. Link must locate three Gold Kinstones in the area to fuse with the three Mysterious Statues in order to proceed into the Wind Ruins. Once each statue receives its Kinstone, its face changes to a smile and it jumps, doing progressive damage to a boulder blocking the path until the boulder is destroyed with the third and final Fusion.

Source of the Flow

Main article: Source of the Flow

The Source of the Flow is the solid stone closed doorway located near the main waterfall in Veil Falls. It is quickly accessed by taking a route from the northeastern exit of North Hyrule Field. The doorway itself, however, can only be opened by one Gold Kinstone given to Link by Gustaf, the spirit of a long-deceased Hyrulean king, who rests in the Royal Crypt.

The Mysterious Clouds are lumps of cloud found sporadically placed about the Cloud Tops, which respond to five different Gold Kinstone Fusions. These five clouds, when activated by their Kinstone counterparts found in the area, energize the five Pinwheels at the center of the Cloud Tops, creating a vortex that whisks Link upward to the Home of the Wind Tribe when all five Pinwheels are whirling. 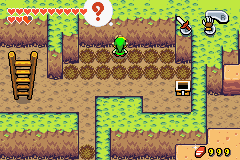 A Mysterious Wall with an available Kinstone Fusion

Mysterious Walls are Kinstone-acceptors built into the wall faces of Hyrule, commonly seen in caves that are accessed through use of the Mole Mitts. These walls, when fused with Blue Kinstones, will start and prolong the Gorons' task of breaking through a cave at Lon Lon Ranch, and after six Fusions with six different walls along with the farmer Eenie across Hyrule, events will line up so that Link will have the opportunity to get another Empty Bottle and the Mirror Shield, due to the awakening of Biggoron over Veil Falls. Nevertheless, Fusing Kinstones with these Mysterious Walls has no effect on the plot development of The Minish Cap, nor does the obtainment of the Empty Bottle or Mirror Shield that may result.

Unlike most sidequests of the series, the Kinstone Fusion quest only indirectly rewards Link. The second aspect of a successful Kinstone Fusion is to actually find the reward. After a successful match, the Map Screen will denote the general location and type of reward.

The Tingle Siblings? keep track of successful Kinstone Fusions, including Gold ones. After all 100 are Fused, Tingle will replace the Kinstone Bag with the Tingle Trophy.